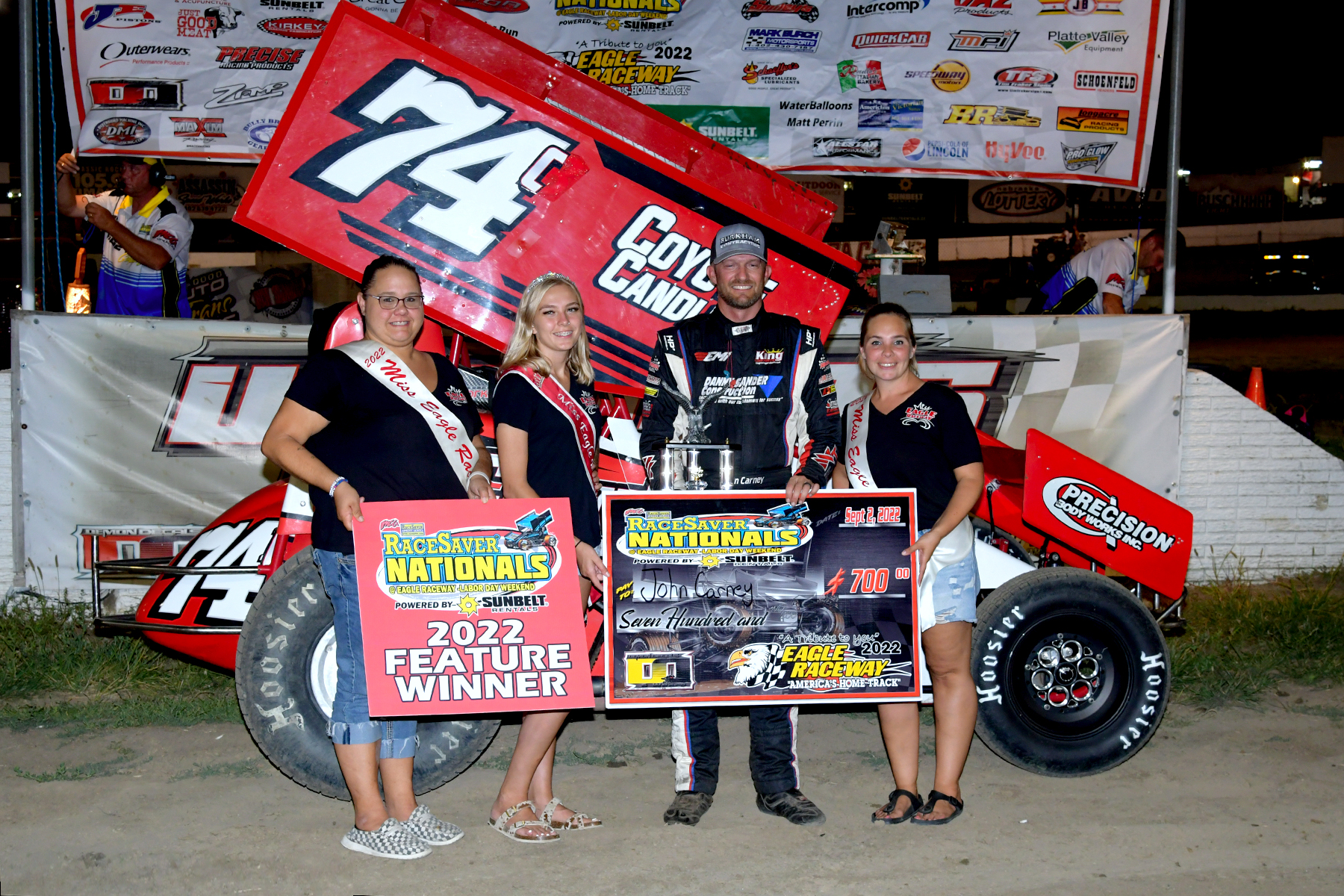 A threat of afternoon rain held the crowd down as Day 2 of the IMCA Sprint Car Racesaver Nationals, Powered by Sunbelt Rentals took place at Eagle Raceway Friday. A clear blue sky with LOTS of sun and mid-90’s made it tough on the crack track prep crew, but several reworks of the track gave the racers a nice surface to compete on.

There were a total of 91 sprint teams that towed to Eagle Raceway from all over the country to test their mettle against the best Racesaver drivers anywhere. As a support class the IMCA Hobby Stocks were on hand to allow the sprint teams to have time to make adjustments and any necessary repairs. 13 heats of sprint car action set the field for the G through A Features.

There were only 2 serious incidents in the preliminary action. The first came in the C Feature for the sprints when Mike Boston rolled the #51 on the back stretch, The other happened in the B when contact between the 11X of Toby Chapman and Taylor Courtney’s 22P sent Courtney’s mount flipping in turn 1. Neither driver was seriously injured, buy both cars were done for the night.

The A Feature for the IMCA Hobby Stocks saw Mike Hansen’s 94 lead lap 1 with the 13T of Tyler Jackson, the 46 of Ryan Gilland and Brendon Stigge in the 69S in hot pursuit. Tanner Dowty looped the 7T in turn 4 for a caution with 12 to go. There were 9 circuits remaining when the 25 of Brandon Fisher came to a halt after spinning coming out of turn 2. 1 lap after the restart Stigge passed Gilland for third. A mechanical failure sent Jackson’s car headlong into the Armco at the top of turn 4, resulting in him heading to the pits on the hook. That allowed Dillon Richards to take up the fourth spot in the 24R behind Gilland who moved to third with Stigge advancing to second. From there to the checkers the top 4 remained unchanged with Hansen winning, Stigge second Gilland third and Richards fourth.

He said “I got to start up front tonight, but after finishing second in my heat race and a good run in the feature I managed to stay there for the win. The track was nice tonight, real nice. I was a little surprised that I never saw somebody, but after each restart I knew that all I had to do was cruise. I want to thank my friend Brad Schreiner, my brother Kevin Hansen, Luke Nicholson and Michelle for helping me keep doing this”. Mike’s long-time sponsor is Keckler’s.

Then it was time for the IMCA Sprint Car Racesaver finale.  On the initial attempt at a start, Nate Weiler in the 4W and the 21A of Bradley Sterrett both ended up going through the infield but got back onto the track. This caused an inadvertent yellow, and a complete restart was called. The first official lap saw John Carney II in the 74C out front with Max Guilford’s 37M second, Chad Wilson third in the #20 and Weiler fourth. Ryan Navratil’s 12P slowed going down the front stretch for another caution period. Guilford took over the lead on the restart. Lap 9 saw Navratil stop in turn 4 and the yellow lights again came on in the corners. Jake Bubak moved into the fourth spot on lap 15, but the move was negated when Navratil again looped it, this time in turn 2. Bubak again gained fourth on the restart. The 25X of Gunnar Pike spun in turn 4 the next time around for yet another caution. Carney got past Guilford with 9 to go for the lead with Wilson also getting around Guilford the next lap for second. A debris caution was called with 5 circuits remaining,  Bubak moved to third on the restart but a caution for the 12 of Tyler Drueke stopping in turn 1 slowed the action. Bubak successfully made the pass to third with 3 to go making the top 4 Carney, Wilson, Bubak and Guilford..

Carney’s ride was a sister car to Bubak’s. I mentioned to John that he had grabbed the pole position for Sunday’s Big Dance, to which he replied “It’s awesome! Dane (Carney’s car owner) wanted to run 2 cars at the Nationals this year, so we followed that plan and with Jake finishing third we have both cars on the front row for Sunday. That’s pretty awesome for him and his team. This makes for an easy Saturday night for us both and we’re both happy to get locked in the first night. Everything was going good tonight. I knew that if I could get through the lapped cars I could get back to the lead. I knew I had a good car, but I just had a couple of not so good laps there and Guilford got by me. He really showed me that the bottom was stronger. I am kind of stubborn I guess, so I tried the top line a few times and couldn’t make it work, so there towards the end I went into protect mode and stuck to the bottom for the win. The people that are most important to me are my family and the folks who help me. There’s a LOT of people who help this team to do what it does”. Carney’s sponsors include Coyote Candle Company, KRS Fabrication and Momentum Racing Suspensions”.

Saturday sees night 3 of the IMCA Sprint Car Racesaver Nationals, powered by Sunbelt Rentals. Those who did not qualify for the Big Dance will have their shot at being in rows 4 through 6 Sunday. Following the qualifying will be the Precise Racing Products Race of Champions. There will be a pit party going until 2 AM with music provided by Rock Sinatra. The Melon Bar will be open to supply your thirst aid requests. To celebrate the 10th anniversary of the IMCA Sprint Car Racesaver Nationals there will be a $10,000 money drop in the pits also.

Come on out for some exciting racing and stick around for the festivities afterwards.

Hot laps begin at 5 with racing at 6. Support class is the Avid Realty IMCA Sportmods.