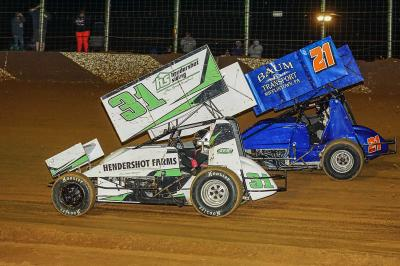 The PA Sprint Series returns to its roots Saturday at the quarter-mile “bullring” Path Valley Speedway.

The IMCA/RaceSaver sprints will make their third of six scheduled visits to the track that has hosted them since their second season, 2000, for a 25-lap feature and qualifying events. Modifieds, Central PA Legends, 600 micro sprints, 4-cylinder thunder cars and 4-cylinder strictly stocks also are on the program.

Kruz Kepner of Kreamer and Garrett Bard of Wells Tannery have won the two features contested so far at Path Valley, and both are expected to be on hand. Bard also is the winningest active PASS driver at Path with four victories, one more than Ken Duke Jr. of Selinsgrove. Mikell McGee of nearby Doylesburg, a descendant of the track founders, is the defending division champion.  Kepner and Bard current stand third and fourth in PASS points, behind leader Austin Reed and runner-up Doug Dodson.

While he didn’t run in the first PASS race at Path Valley, veteran racer Mike Alleman of Port Royal was in the field for other races during that first season, and he has preregistered for Saturday’s event as well.

The July 4 holiday weekend will be a full one for PASS racers, starting with a two-day show Friday and Saturday at Clinton County Speedway, co-sanctioned with the Laurel Highlands Sprint Series. Friday will feature the Founder’s Cup race, while Saturday will have the third annual running of the Nittany 40. Stock car and micro sprint support divisions will run both nights, and Saturday will have fireworks.  On Sunday, July 3, PASS will race as the support division at Selinsgrove Speedway for the final night of the 2022 PA 410 Sprint Speed Week.