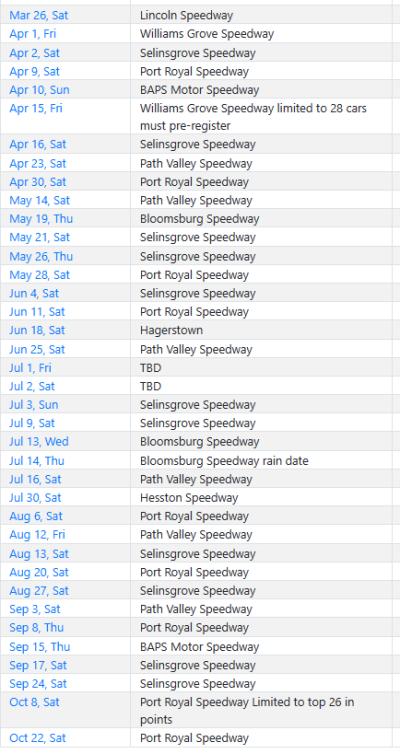 The Pennsylvania Sprint Series (PASS), one of the nation’s strongest regional series for the ultra-successful RaceSaver economy sprint cars, has released a 34-race 2022 schedule at eight different tracks. With a late addition of 3 additional races the schedule has grown to 37 as details for some special co-sanctioned races emerge.  The schedule will begin on Saturday, March 26, at Lincoln Speedway, and end with the annual Keystone RaceSaver Challenge on Saturday, October 22, at Port Royal Speedway.

Additional co-sanctioned events may be scheduled in conjunction with neighboring RaceSaver regional groups. Hesston Speedway which was one of the series original tracks has added a race in co-operation with the Laurel Highlands Sprint Series which will be a very special event to be announced soon.  PASS will race supporting 410 sprint cars on at least 15 occasions this year, including dates with the World of Outlaws and All Star Circuit of Champions. Other shows will feature URC 360 and USAC Eastern Non-Winged 360 sprints. Super late models (including a World of Outlaws Late Model+ show), limited late models, big-block modifieds and micro-sprints.  Twenty-four of the dates are Saturdays, with one on Wednesday night, four on Thursday, three on Friday and two on Sunday.

The PASS series produced the IMCA/RaceSaver National Champion in 2019 (Ken Duke Jr.) and 2020 (Garrett Bard), with the latter narrowly missing repeating last season. Newcomers to the series also have fared well nationally, with Doug Dodson and Austin Reed finishing second in the national Rookie-of-the-Year competition in 2019 and 2021, respectively. Last year, Reed missed out on winning the title by one point.

The series was conceived shortly after its initial development by Virginia racer/innovator French Grimes. Following an exhibition season in 1998, when the RaceSavers raced alongside a pre-existing 4-cylinder sprint series, the first official season was held in 1999, with all races at Hesston Speedway. Path Valley joined the schedule the next season, and other tracks soon followed.  Two-time Champion Garrett Bard of Wells Tannery is expected to be among a large group of 2021 regulars returning for this season, along with a strong class of rookies. For the latest schedule information and other news, visit www.pasprintseries.com, the PA Sprint Series Facebook page, or @pasprintseries on Twitter.