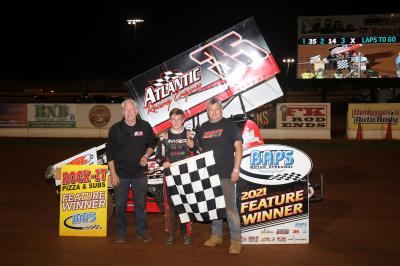 Schweibinz, the Petersburg, N.J., teenager who won his first sprint car feature a month ago at Port Royal Speedway (on his first run there), led fellow teen Logan Spahr of Lewisberry across the line by 3.394 seconds Saturday.  But his stiffest challenge came from veteran Dave Brown Jr. of Aston, who was on Schweibinz’s bumper for several mid-race restarts and applied the kind of pressure expected of a racer with multiple victories in IMCA/RaceSaver sprints. With Brown looming, Schweibinz executed his restarts in the BAMF LED Off-Road Lighting/E.R. Dietz Masonry #35 like a seasoned pro.

Brown would drop off the lead pace for the last several laps and settle for a sixth-place finish.  Schweibinz started the race on the outside of the front row, beside fellow rookie Jarrett Cavalet of Hollidaysburg. The first two starts were called back after on-track incidents, the first of which eliminated hard-luck Donavyn Knokey of Saginaw, who was caught up in an accordion-like incident in the second turn. Knokey’s was the only car eliminated by an incident all night.

On the third start attempt, Cavalet led Schweibinz into the second turn, but the New Jersey driver showed more power on the back straight and took the lead, for good, as it turned out.  Brown’s challenges spiced up the middle of the race, but his problems at the end left Spahr too far behind to challenge, once he inherited the runner-up spot.

Josh Bricker of Kennett Square ran in the top five the entire race and claimed third, ahead of Kristina Pratt of Sewell, N.J., and Roger Weaver of Jonestown.  Completing the top 10 were Brown, Dave Wickham, John Fiore, Logan Jones, and Paul Moyer.

Jones, who was racing a full-sized sprint car for the first time after success in micro-sprints and Legends, earned the Auto Core Recycling Hard Charger Award for advancing nine positions after starting at the rear of the field. Weaver moved up eight spots for his career-best first top five.  Auto Core Recycling also sponsored a Hard Luck Award, which went to Cavalet, who fought for a top five until mechanical ills forced him out of the race at the halfway mark.  Heat races for the 18 PASS and MASS sprinters on hand were won by Spahr and Bricker.

The race was part of a unique RaceSaver doubleheader, which had the PASS top 26 in points competing at Port Royal Speedway in support of the World of Outlaws show there, while the other series teams and those from MASS raced at BAPS. Between the two tracks, 42 cars were in competition.  Next week PASS returns to BAPS for full programs on both Friday and Saturday nights during the Insinger Performance/Sunoco Nationals Fueled by Miller’s Racing Parts.