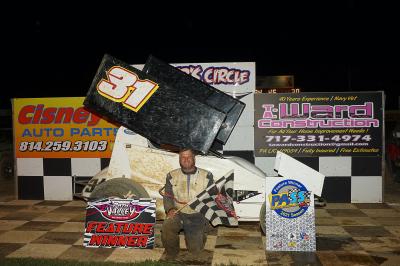 Veteran racer Donnie Hendershot of Clear Spring, Md., has developed a fondness for Path Valley Speedway . . . and for winning.

Over the years, the driver of the family-backed Hendershot Siding/Hendershot Farms #31 had scored the majority of his best finishes at BAPS Motor Speedway, but in May he earned his first career victory at Path Valley.  Just four months later, he returned to the Spring Run bullring and earned win number two.  On a track where passing was at a premium, Hendershot slipped by early leader Mike Alleman of Port Royal and held off a charge from Austin Reed to capture the regularly scheduled PA Sprint Series feature.

Earlier, Dom Melair of Warrington took the lead from Jimmy White of Mount Union and scored a win in the conclusion of a feature postponed by rain August 13 after eight laps had been completed.  In the regular feature, Alleman, the only regular PASS competitor to have raced in the series since its founding in 1999, fought off an early charge by Hendershot but eventually succumbed to an outside pass from the Maryland racer.  After a lap nine caution for Rowdy Heffner and Garrett Bard, who tangled in turn two, Reed got past Alleman and began applying pressure to Hendershot, but Friday night’s Williams Grove winner wasn’t able to complete the pass for a weekend double, and Hendershot crossed the finish line .343 seconds ahead.

Alleman hung on for a third-place finish, with Mikell McGee of nearby Doylesburg taking fourth and earning the Hard Charger Award for the night with his five-position advance. Rookie Jarrett Cavalet finished fifth, his second straight top five after a strong run in the Laurel Highlands Sprint Series race Friday at Clinton County Speedway.

Heat race for the 15 PASS teams in attendance were won by Reed and Stevie Kenawell.

Jimmy White had been leading the August 13 feature when the rains came, but Melair, who won the last PASS feature run at Path Valley two weeks ago, won the initial drag race for the lead and was never headed.  Mikell McGee gave Melair a stiff challenge in the latter stages of the race but had to settle for second place, with Donnie Hendershot coming home third, John Walp fourth, and White fifth.  Zach Rhodes, Rowdy Heffner, Andrew Boyer, Stevie Kenawell and Austin Reed completed the top ten, with Reed not running at the finish.

Eleven cars returned to run the make-up portion of the race, and Mike Melair was unable to start, due to continuing gremlins under the hood, which also kept him out of competition Friday at Williams Grove. Because of multiple accidents in the August portion of the race, only 12 cars would have run the remainder of the event then.

This weekend the PASS drivers and teams will join 410 sprinters on the program for the River Valley Builders Jim Nace Memorial 39th Annual National Open. Racing is scheduled to begin at 7:00 p.m.  For the latest news and schedule information, visit www.pasprintseries.com, the PA Sprint Series Facebook page, or @pasprintseries on Twitter.