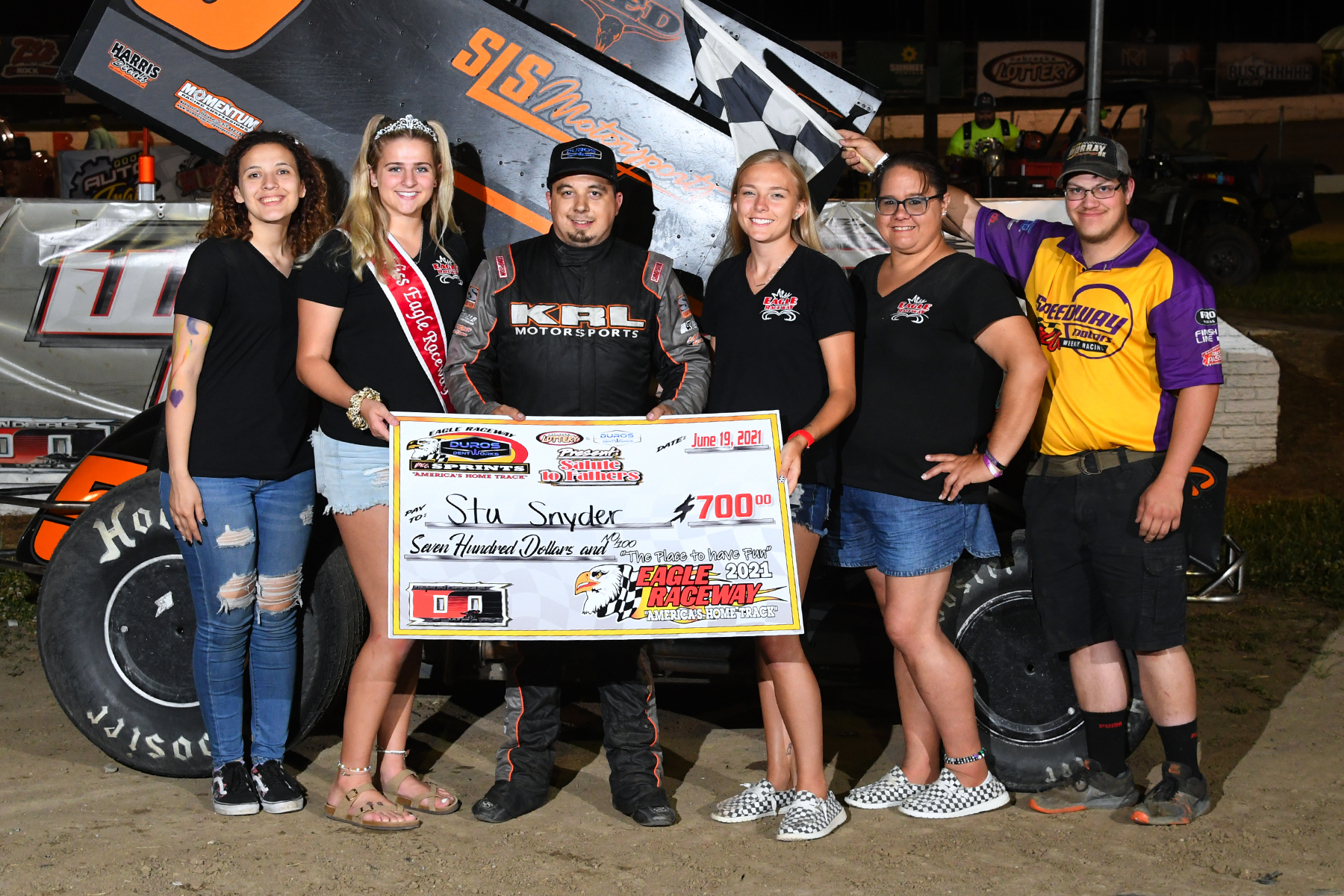 Highs in the 90’s and a breeze usually leads to a dry and dusty track, but Roger Hadan and the rest of the track prep crew worked all day to be sure that didn’t happen. The large crowd that showed up for Salute to Fathers, presented by Duros Dent Works and Nebraska Lottery may not have been prepared for the fabulous three-wide racing they were treated to, but they got it.

There were no serious incidents in the preliminary action.

Gene Ackland in the 14G, Neil Nickolite’s 12N, Gunnar Pike in the 25G and Dan Nekolite in the 22D led the initial circuit of the Duros Dent Works IMCA Racesaver Sprint Car finale. Nekolite passed Pike for third the next lap before losing the spot to Stu Snyder in the 5 the next time around. Pike got the fourth spot back the following lap. Nickolite passed Ackland for the lead on lap 5. Jason Danley took over fourth in the 4X on lap 8. Trevor Grossenbacher got past Danley on lap 11 in the 35. Snyder took over the top spot on lap 12. There were just 5 circuits left when Grossenbacher moved to third, putting Ackland in fourth. Grossenbacher moved up to second the next lap as Jason Danley regained fourth. Danley advanced to third with 2 to go. At the checkers it was Snyder, Grossenbacher, Danley and Nickolite.

Stu related “I started seventh, and that’s probably the best we’ve started here all year, but that’s because we haven’t been running here too much. We’ve been kind of hitting and missing. We’ve been hitting other tracks and just having fun on the road. We figured we’d come back and go back to our notebook to try and find something that worked last year because what we’ve been doing this year hasn’t been working. We found it tonight. We changed things today at the shop and we unloaded it and it was really fast in hot laps. Then we rolled it out for the heat race with pretty much the same set up, then changed it a little bit by tightening it up for the feature. We were able to get up through there and get into clean air. Then when the rubber came in at the end it was just ‘don’t make a mistake’. When we unloaded I thought ‘Man, this thing might take rubber super early, but it didn’t. They did a good job on the track when they went out at intermission and reworked it. That made it really racey. Roger never gives up and neither do we. It did take rubber with about 13 to go, and I could feel it really lock down. I want to give a special thanks to KRL Motorsports. Roger, Ron Love and Kenny Love. They’ve continued to back me the last few years. It’s kind of been a dream of mine to drive for them because I’ve been growing up with them all of my life. Being over there at the shop with Ron having a good time. Also, my whole crew. These guys and gals bust their butts week in and week out. They keep us trucking down the highway, wherever we feel like going and we’re having fun doing it.” Stu’s sponsors include Meyers Racing Engines, Momentum Racing Suspensions, JR1 Chassis, KRL Motorsports, HoZby Power, Robin LePage, KED Trucking, Mister Yards and More, Keizer Wheels and Simpson Racing Products.

This coming weekend is Junior Fan Club Night, presented by Colby Ridge and Village Pointe Toyota. Kids 12 and under receive free front gate admission. There will be a $1000 kids money grab on the front stretch at intermission.

Hot laps begin at 5:30 with racing kicking off at 6:30. All 5 classes will be in action, including the Duros Dent Works Sprint Cars, Nebraska Lottery Modifieds, A1 Iron/Sany Stock Cars, Modern Real Estate SportMods & Valentino’s Hobby Stocks.