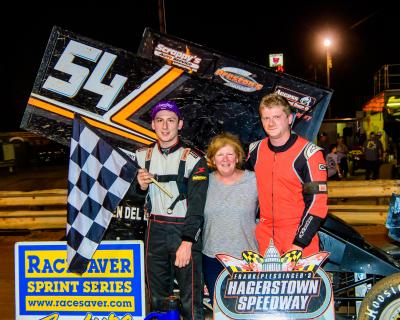 In the first 10 races of Mike Melair’s first full season of PA Sprint Series competition, there had been steady improvement but not a whole lot to show for it, with a 13th at Selinsgrove two weeks ago the high point.

But that didn’t mean that Melair didn’t know what to do after drawing the pole position for Saturday’s Virginia Sprint Series-Laurel Highlands Sprint Series-PASS feature at Hagerstown Speedway. The Warrington, Pa., driver mashed the pedal, brushed off a challenge from Mikell McGee, and raced to his first career victory in the 25-lap race.

Actually, the Glen Del Labradors #54 will get credit for multiple wins, because the interregional race will count for all three participating IMCA/RaceSaver series.

McGee was nearly a quarter of a lap back at the end, despite being able to narrow the gap a couple of times in traffic. Domenic Melair, the winner’s brother, came from 12th starting position to finish a strong third, slipping past veteran Ryan Lynn just before the race’s end. 2020 IMCA RaceSaver National Champion and PASS Champion Garrett Bard was fifth.

The race was slowed once on the original start when a multi-car tangle in turn four eliminated the cars of Steven Kenawell Jr. and Scott Frack. Melair got a solid jump on the restart and fought off an early challenge from McGee. Even in heavy traffic over the last quarter of the race, he held his lead.

With the long stretch of green-flag racing there was much passing for position throughout the race, and Scott Lutz ended as the hard charger, improving his position from 18th at the start to 8th at the finish. Dom Melair moved up nine spots to third, and Duke, Reed and Young each gained eight positions.

Heat races for the 30 IMCA/RaceSaver sprints on hand went to Mike Melair, Shatzer and McGee, with Austin Reed taking the B-Main. The most serious incident of the night took place in the first heat when Rowdy Heffner nearly flipped out of the track after contact with Mike Leraas. Heffner walked away from the crash, but his car was finished.

Next weekend the PASS sprinters return to Path Valley Speedway’s quarter-mile bullring for a program also featuring the wingless Super Sportsman cars, 270 and 600 micro sprints, 4-cylinder thunder cars and 4-cylinder strictly stocks. This will be the first of two consecutive weekends PASS will compete at Path Valley.