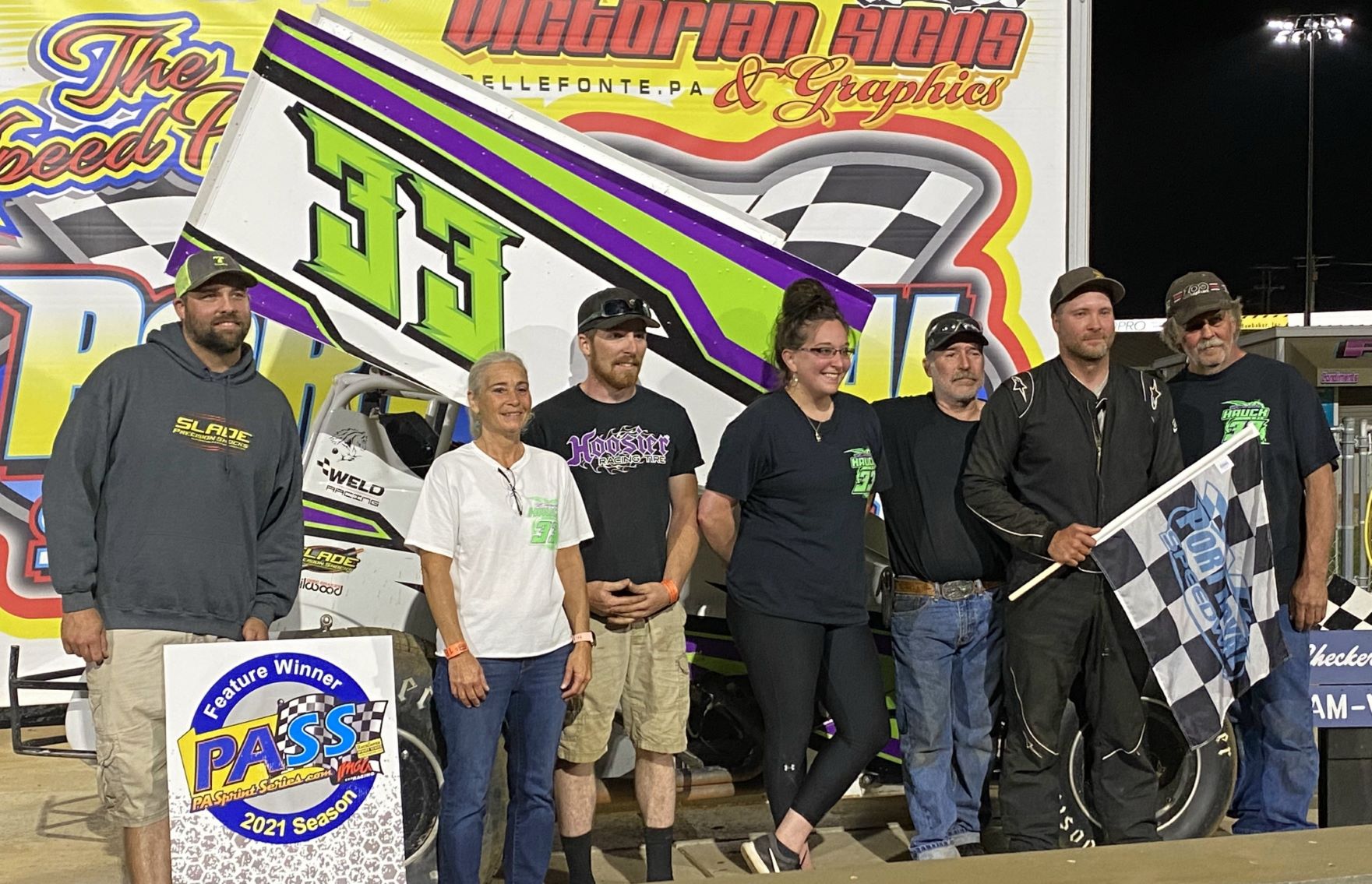 Two young chargers put on an old-fashioned battle at Port Royal Speedway Saturday night before Derek Hauck emerged with the 20-lap feature victory over Garrett Bard at the “Speed Palace.”

The Allenwood racer’s Fultz Auto Body of Lock Haven #33 took the lead for the final time on lap 13, but the battle for the lead only ended when Hauck crossed the state/finish line 1.069 seconds ahead of Bard at the checkered flag.

At the green flag, it was Bard moving up from his third starting position to challenge pole-sitter Devin Adams, with second-starting Hauck lurking behind them. Adams and Bard traded the lead on the first lap before the 2020 PASS and IMCA/RaceSaver National Champion prevailed on lap two. Hauck and Adams then battled for second for four laps before a slowing Mickell McGee brought out the feature’s first caution.

Following the restart, Hauck claimed the runner-up spot before a lap eight caution for a front-stretch incident that left Paul Moyer backwards against the inside wall. On that restart, Hauck slipped into the lead on the backstretch, only to surrender it to Bard in turn three. But four laps later, Hauck made the move that stuck.

Meanwhile, Dom Melair, driving the Ort Racing #36, was charging from his eighth starting position, taking fourth from Kassidy Kreitz after the lap 12 restart and the slipping past Adams into third.  Behind them, Dave Grube, winner of three straight recent races in three different RaceSaver regional series, was advancing from his 18th starting position. He would get to seventh before time ran out, but it was still enough to earn the York Haven veteran the Penns Valley Meat Market Hard Charger Award.

Mikell McGee picked up the “oh poop, I finished last” award courtesy of Herbie Stoner AKA “the poop guy” supplier of portable  facilities at the track. McGee suffered a broken suspension part that sidelined him early.

Garrett Bard picked up the VP Fast Finisher Award with a case of oil courtesy of VP Lubricants.

The finish was Hauck, Bard, Melair, Adams and Kreitz, followed by Christian Rumsey in sixth, then Grube, Jeffrey Weaver, Erin Statler and Roger Irvine.  The top five was among PASS’s younger sets of frontrunners, but veterans Statler and Irvine, each a PASS competitor for more than 15 years, anchored the top 10.

With a stout field of 46 RaceSaver sprints on hand, it took five heat races and two B-Mains to set the field. Dustin Young claimed his first heat win in the first contest, after Doug Dodson lost a wheel while leading. Hauck passed Statler in the final turn to win the second heat, coming from ninth starting position, then Rumsey and Ken Duke Jr. had a stirring duel for second behind runaway winner Kreitz in the third.  Bard won the fourth heat easily, and Nick Sweigart triumphed in a tough battle with Bob Garvey for the final transfer spot. Weaver took the final heat, and Melair edged Jake Waters for second in the final turn.  In all the heats, only three cars failed to finish.

Kruz Kepner won the first B-Main, as McGee and Sweigart battled behind him, the McGee coming out ahead. The second B-Main was perhaps the most intense race of all the prelims, with John Fiore winning in his first PASS appearance of the year, and Dodson coming from eighth to finish second.

Next Saturday PASS joins the Laurel Highlands Sprint Series and Virginia Spring Series for a 20-lapper at Hagerstown Speedway. With a 7:00 p.m. starting time, the program also will include Mid-Atlantic Modifieds, pure stocks and hobby stocks. Grube was the winner of a non-PASS RaceSaver event at Hagerstown last month.