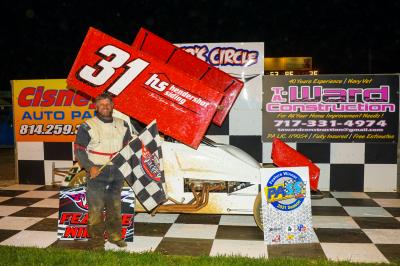 Hendershot, who began racing with PASS in 2013 after a successful tenure in micro sprints, had a pair of runner-up finishes on his resume, but had only run four times in each of the past two seasons and hadn’t scored a top-5 finish since late 2018. Still, when the opportunity presented, he knew exactly what to do, and the Hendershot Siding/Hendershot Farms #31 was up to the task.

After finishing second in his heat race, Hendershot drew the outside second row for the feature. Outside front-row starter John Walp of Wapwallopen, the defending Path Valley RaceSaver Champion, darted into the lead but spun in the first turn. That moved Hendershot up to the front row.

The red flag had come out for the double mishap of Walp’s spin and a collision between Alyssa Rowe and Tyler Cochran as the field came to a halt. When the race finally got underway for the second start, Hendershot outpaced Reed and grabbed the lead, stretching it out until lapped traffic closed the leaders.

The lapped cars ended up costing Reed rather than Hendershot, though, as the second-place runner made contact with a lapped machine (pulling a huge wheelie in the process), allowing Jeff Weaver of Lock Haven to slip into the runner-up spot, where he finished. Defending PASS and IMCA/RaceSaver National Champion Garrett Bard of Wells Tannery also made it past Reed to take third place, while Reed holding on to finish fourth, ahead of Justin Mills of Bloomingburg, N.Y.

In victory lane, Hendershot gave special mention to his brother for having stuck with him throughout his racing career.

Heat winners for the 24-car field were Reed, Weaver and Mills.

Zionkowski was the hard charger of the race, moving up 14 spots from his 22nd starting position to eighth. Duke made a 10-position charge, and Dom Melair advanced seven spots in his first start in the #36. Jared picked up a brand new right rear tire from HTMA for making the most passes.

This Saturday, PASS returns to Selinsgrove Speedway, where the May 8 program was rained out. The USAC East Coast Wingless 360 Sprints, limited late models and roadrunners also will be on the schedule. Racing is scheduled to begin at 7:00 p.m.

Results from Path Valley Speedway May 15