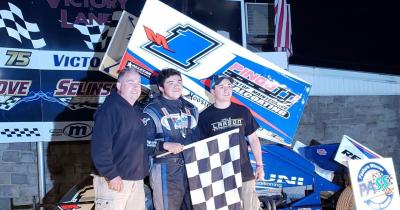 The Bloomingburg racer in the Pingotti Seal Coating/Val Bruno Plumbing & Heating/Hufcut Concrete #M1 started third and chased pole-sitter Rumsey for a dozen laps before making the pass for the lead on lap 13. Middletown racer Rumsey hung tough and continued to challenge, though, and when the race was stopped with one lap to go for a scary incident when Jared Zionkowski’s #41Z caught fire and stopped on the front stretch – Zionkowski escaped injury – he had one last chance, but Mills was up to the task and edged his challenger by less than one-tenth of a second (0.082) at the checkered flag.

“That was a long red flag,” Mills said in victory lane. “I was just thinking where I should go, top or bottom. I knew the oil was there, so I was trying not to run into that. It just all worked out good.”

The win was Mills’ first in a full-sized sprint car. In a 10-race rookie season with PASS in 2020, the M1 was usually fast but a fourth at Lincoln in September was his only top-10 to reward his efforts. This was his first start of 2021.

While most of the top finishers ran near the front all night, there was plenty of passing throughout the field, and Larry McVay was the night’s hardest charger, advancing 14 positions from the back of the field – 26th – to 12th place. In the top 10, Graby had the best charge, going from 18th to 9th.

Forty RaceSaver sprinters packed the pit area, making qualifying incredibly difficult for the second weekend in a row. Heat race wins went to Mills, Dodson, Grube and Mikell McGee. Dom Melair won the 15-car B-Main. With the high car count, Selinsgrove added to the B-Main payoff and awarded a free racing tire to a randomly chosen entrant, which turned out to be Jake Waters.

After two weekends of racing on sweeping half-mile tracks, PASS moves to the quarter-mile bullring of Path Valley Speedway this Saturday. Wingless super sportsman cars, 270 and 600 micro sprints, 4-cylinder thunder cars and 4-cylinder strictly stocks also will be on the program. On Saturday, April 24, the tour returns to Port Royal Speedway, the first track to be visited twice in 2021.

For the latest schedule and news updates, visit www.pasprintseries.com or the PA Sprint Series Facebook page.

(NOTE: Feature results are unofficial due to a scoring error in mid-pack. The issue is expected to be resolved this week prior to submission of results to IMCA.)