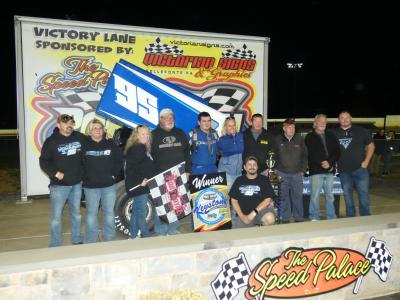 wo weeks ago his car was junk, destroyed in a wicked crash at this same track, but after nonstop work by a family-and-friends team, Garrett Bard returned his mount to Port Royal Speedway Saturday and won the Ninth Annual Keystone RaceSaver Challenge, the signature event and season finale for the PA Sprint Series.

“When we put this car together, our goal was just to make the race, because we knew that would give us the Port Royal (points) title,” Bard said. “We knew our first laps in this car would be our time trial laps, and I had no idea what to expect, and I went into the first turn, and it didn’t even turn at all, and I was like this is completely different – the set-up that we had, that we put on this, wasn’t very close to our other car, so just to be standing here, after everything, it’s so awesome.”

“I know starting second really helped,” he continued. “My car felt really good. When I got to traffic I had different issues at different times – it seemed they wanted to race me a little harder than I’d thought. I couldn’t get on the brakes very well; it seemed almost like I had to pump them up – they weren’t doing too good.”

“Then we had that caution, and as soon as I let up, I saw Justin, and I knew he was right there. And then I looked at the scoreboard and it said lap 11, and I said, ‘Man, I could have sworn we were a lot farther along than this.’ And then we had a caution two laps later, and (I saw) it was counting down. That helped me feel a lot better, because I realized that I’d only get to traffic on about my last lap.”

Traffic certainly was not Bard’s friend Saturday. After taking the lead from fellow front-row starter Robbie Bartchy and building a healthy margin over first Christian Rumsey and then Clark, Bard began to lose that lead when he hit traffic just past lap 10, and by lap 14 Clark was in a position to challenge, but Jason Roush spun in turn two – just ahead of the leaders – and Bard once again had a clear track on the restart.

As the winner noted in victory lane, another caution two laps later gave him a chance to rebuild his lead, and traffic in the final two laps of the 25-lap event failed to provide Clark enough of an opportunity.

For Clark, the runner-up finish was vindication along with disappointment at not getting the win. Another trip to Pennsylvania earlier in the season had resulted in a second-place that was lost when the #78 failed post-race inspection.

Rumsey ran strong all race and came home third, ahead of Jared Zionkowski and 2019 IMCA/RaceSaver national champ and PASS champ Ken Duke Jr., who swapped the fourth spot back-and-forth in the final laps. Duke was the only frontrunner making successful use of the low groove on the daytime-then-evening “Speed Palace” surface.

The win was Bard’s 10th of the season with PASS, and he has multiple wins in both the Laurel Highlands Sprint Series and Allegheny Sprint Tour as well. He is now the 2020 IMCA/RaceSaver national champion, the Pennsylvania state champion, PASS champion and Port Royal champion – all in the driver from Wells Tannery’s first full season racing full-sized sprint cars.

Six heat races were run for the 55-car field, and they were won by Bartchy, Dodson, Rumsey, Domenic Melair; Bard and Jacob Gomola. Incredibly competitive B-mains were won by Sweigart (over 18 other cars) and Kassidy Kreitz (over 17).

In the first B-main, former Keystone winner Jake Waters lost a qualifying spot to engine trouble with two laps remaining, and the flames from his motor caused concern, because Waters was badly burned in an incident several years ago. Fortunately, he was not injured.

In the second B-main, veteran Ryan Lynn, fresh from being inducted into the new PA RaceSaver Hall of Fame, grabbed a qualifying spot at the checkered flag from hard-luck rookie Branstin Shue.

The most serious incident in the feature came on the initial start when Larry McVay got into the first-turn wall and then rolled his #83. He was not injured, either.

A long list of sponsors came on board for this year’s Keystone, providing awards for hard charger, hard luck and longest distanced traveled, plus most of the 25 feature laps had a sponsor – that money went into increasing the overall purse.

In a season shortened by COVID-19 restrictions, PASS still managed to run 27 features, with 14 drivers taking feature wins. Besides Bard, multiple winners were Sweigart and Dodson, with three wins each.

PASS will held an awards banquet in January. Plans already are underway for the 2021 schedule, which likely will begin in large March or April.