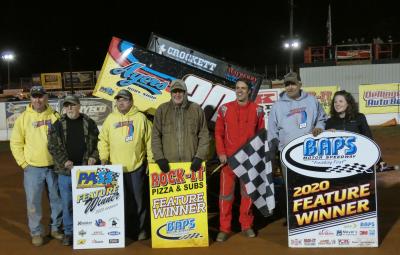 The Middletown driver, who finished second in PASS points for 2020, captured the make-up feature rained out on August 1 and again on August 29, then pulled out all the stops for a dramatic late-race pass and victory in Friday’s regularly scheduled 20-lapper. The wins doubled the career total for Dodson, who also has experience in other sprint divisions and super sportsman cars.

In the make-up feature, Dodson’s PowerMist Racing Fuels/Crockett Log Homes/Fastener Specialties #20 dueled for the early lead with York Haven’s Dave Grube II, then passed Grube in traffic near the race’s mid-point. A subsequent caution gave Dodson a clear track, which he used to hold on for the win over Grube by 0.872 seconds.

Adams was the race’s hard charger, advancing eight positions from 11th starting spot to third, while Melair moved up seven, from 14th to seventh.

In the regular feature, Adams edged fellow front-row starter Derek Hauck for the early lead, but Dodson was the racer on the move, advancing from eighth starting spot to fourth in three laps and taking third on lap eight. Behind him, Dave Brown also was edging ahead through a series of torrid battles throughout the top 10.

On lap 16, Walp came to a stop in turn two, setting the stage for a four-lap dash to the finish. On lap 17, Dodson slipped past Hauck for second and set his sights on the leader; with two laps to go, the front two were running nose-to-tail.

Coming out of turn four for the white flag, Dodson swept high, got a great bite on the dust-free track, and made it past Adams. Holding onto that lead, he scored the win by 0.559 seconds.

Adams finished second, with Brown edging Hauck late for third and Price fifth, after a race-long battle with Kassidy Kreitz (both drivers wheeling cars bearing the number 69). Finishing the top 10 were Melair, Grube, Hanson and Sweigart.

Austin Reed, from nearby Etters and making his first PASS start, was the hard charger, moving up 10 spots from 24th to 14th. Winner Dodson advanced seven positions from eighth to first.

Dodson noted in victory lane that his team had to overcome an engine issue early in the evening that almost kept the car off the track, and he said that Adams’ team – which pits next to his – had been instrumental in helping deal with the problem.

“Part of me feels a little bad stealing the win from him,” Dodson said, “because if it wasn’t for them and their crew and his dad, we wouldn’t even be racing. In warm-ups we had an engine issue that we thought was going to end our night, and they jumped right in to help us out . . . really owe a lot to them for helping us get back on the track and allowing us to get these two wins.”

Heat races for the 32-car field were won by Melair, Hanson, Grube and Brown, with Rowdy Heffner taking the B-Main. There were no serious incidents in any of the events, which were part of BAPS’ two-night Sunoco/Insinger Nationals Fueled by Miller’s Race Parts.

With all but one of BAPS’ previous PASS/IMCA/RaceSaver features this year cancelled or postponed by COVID-19 restrictions or weather, Friday’s features also decided the track’s points champion, and Dodson’s pair of wins earned him that title as well.

The 2020 PASS season ends this coming weekend with the Ninth Annual Keystone RaceSaver Challenge race, “The Blue Collar Classic,” at Port Royal Speedway. More than 50 IMCA/RaceSaver teams from as many as eight states are expected to compete.

Racing is scheduled to begin at 3:00 p.m. Limited late models and 4-cylinder pure stocks also are on the racing card.

For schedule updates and the latest news, visit www.pasprintseries.com or the PA Sprint Series Facebook page.