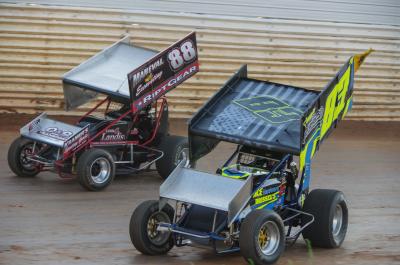 The PA Sprint Series will share the “Speed Palace” clay with the World of Outlaws for the Nittany Showdown Saturday night at Port Royal Speedway.

The Outlaws will be running the second night of a two-night stand at the Port, while the IMCA/RaceSaver sprinters will take part in the track’s “appreciation race” for the division, with entries limited to 26 teams entered by track points.

Atop those standings is Well Tannery racer Garrett Bard, clearly one of the favorites. Already unofficial PASS and Pennsylvania State champion and likely to add the national IMCA/RaceSaver title as well, Bard has three wins and two-runner-up finishes in the five events run at the Port in 2020 (three others were cancelled due to COVID-19 restrictions).

None of which means anything to Saturday’s other competitors, other than perhaps an extra dose of determination. “Nitro” Nick Sweigart of Myerstown claimed the two wins that didn’t go to Bard this year, and his thrilling, last-lap pass to win the Keystone RaceSaver Challenge at the Port last season remains an all-time series highlight.

Equally capable of coming out on top would be 2019 PASS and IMCA/RaceSaver national champion Ken Duke Jr. of Selinsgrove, an eight-time PASS winner in 2019 and runner-up to Bard in this race, or Doug Dodson of Middletown, who finished in the top six in four of this season’s races and nearly won last year’s Keystone RaceSaver® Challenge.

Lady racers Kassidy Kreitz and Erin Statler landed themselves a shot at the win with an impressive 4th and 5th position in track points which is a significant feat given the number of drivers that have tried to earn a spot in this most sought after event. Statler is the guest on this weeks PA Sprint Series Podcast.

Scenarios could be assembled that would give as many as a dozen other drivers a more-than-reasonable chance at the top spot Saturday in which should be a tremendously competitive race.

Division sponsor Penns Valley Meat Market will award its $100 Hard Charger Award in addition to the regular event purse. Penns Valley is already on board to significantly boost their support of the Keystone RaceSaver® Challenge in two weeks.

On Friday, October 16, PASS will return to BAPS Motor Speedway as a lead division for the first night of the 17th Annual Sunoco/Insinger Nationals Fueled by Miller’s Race Parts. The RaceSaver teams will run a full regular program, plus a make-up feature that was rained out on August 1.

The Keystone RaceSaver Challenge, part of the “Blue Collar Classic,” will conclude the season on Saturday, October 24. More information about this special race and to sponsor visit KeystoneRaceSaverChallenge.com..

For schedule information and the latest news, visit www.pasprintseries.com or the PA Sprint Series Facebook or Twitter page.