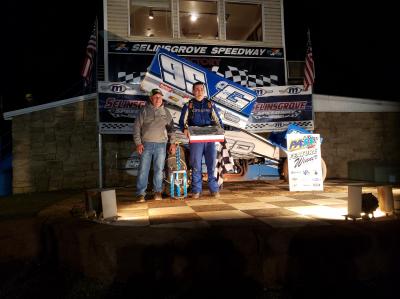 With a national championship on the line, Garrett Bard pulled out all the stops, led all the way in Selinsgrove Speedway’s 20-lapper Saturday night and won both of the PA Sprint Series features on the season’s final points weekend.

After a convincing win Friday night at Lincoln Speedway, Bard drew the pole position for the feature and led all the way, holding off a challenge from fellow young lion Derek Hauck – up from 10th starting position – at the end to win by 0.312 seconds.

2019 IMCA/RaceSaver national champ Ken Duke Jr. – who is not running enough races this year to defend his title – took third place, ahead of fellow veterans Doug Dodson and Jaremi Hanson.

“Derek’s really good between here and Port Royal, all these big tracks,” Bard said in victory lane. “He’s always fast, so when it really slicked up during that last caution, and I looked up and saw that I had a #2 in second and a 2 in third, I knew one of them was Derek, so I know he’s coming, and I just wanted to keep running my race. I tried to move down a little in three and four – it started to get real tight up top – and I think that helped.”

“I wasn’t very good in the heat, and fortunately, I got to start on the pole,” the winner continued. “The tracked slicked off enough, and I knew the car would be pretty good. It was probably a little too tight, and it got a little bit tighter in traffic, but I was just hoping it went green to checkered the whole way, because my car was really good in traffic.”

Bard thanked his sponsors – CG Racing Engines, Barnett Self Storage – after sharing a special thanks: “I’ve got to really thank my dad for all the hard work he’s done this whole year. We set out to try to win everything we could, and I don’t think we realized just how much would go into this – all the time – I think this is the 34th or 35th race we’ve run this year.”

With 39 RaceSaver sprinters on hand, qualifying events were critical, and the four heat races were won by Jared Zionkowski, Devin Adams, Dodson and Duke, who won his heat by more than a straightaway. McGee earned his first feature start with the series by taking the B-Main, after early leader John Walp dropped out.

The race was red-flagged in its first start when heat winners Zionkowski and Adams were involved in a turn one incident that also involved Jason Bergstresser and Fred Arnold. All drivers were OK, but their cars were done for the night. The only other caution flew for a slowing Ron Aurand on lap 12.

The early accident, taking out several cars at the front of the field, created opportunities for nice hard charger numbers later, and Austin Graby claimed the award for moving up the most spots with 16 (to finish eighth), while Mikell McGee, making his first RaceSaver feature start advanced 14 from 21st to 7th.

PASS racers have an open weekend coming up before returning to action with the World of Outlaws at Port Royal Speedway on October 10. Only the top 26 in Port track points will be able to participate in that race.