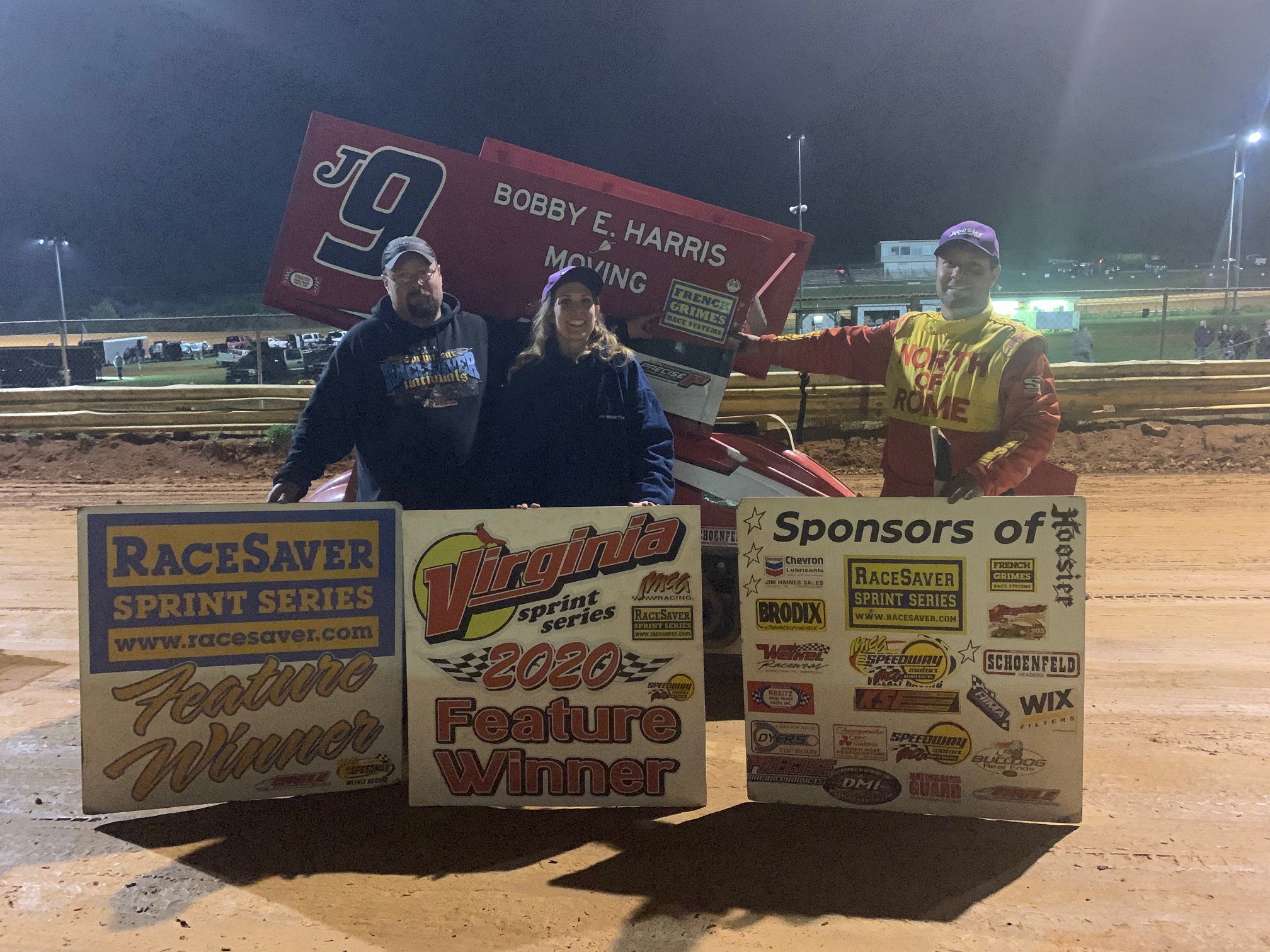 Virginia Sprint Series
Race #7 Rain Make Up and Race #8
IMCA RaceSaver Sprint Series
Natural Bridge Speedway, Natural Bridge, Va.
Jerald Harris Has Double Vision
On the first clear cool night of the year Jerald Harris had a hot night on track getting double vision by taking both features. The first rain make up feature had Daren Bolac out first with the drop of the green and running smooth out front with Mike Leraas in tow. The twenty lap features were going by fast but the track was changing and Leraas was closing in with Mike Keeton and Jerald Harris catching up fast. Leraas got by to lead with Bolac still second but back of the field was coming in to the leaders path which was packing up the front. With the white flag waving Leraas and Bolac were still upfront on the lower side but Harris moved up and was gaining ground fast. Coming off turn four to the checkers the last car on the lead lap bobbled causing Leraas and Bolac to lift. Jerald Harris seized the moment to go high next to the wall and flashed in to the lead and under the checkered flag first all in a few hundred feet. At the line it was Jerald Harris, Mike Leraas, Daren Bolac, Mike Keeton, Bill Rice, Chris Ware, Matt Mullins, Billy Hubbard, Charlie Ware and Mike Cicchillo. After inverting the lead lap cars the second featured rolled to green with Matt Mullins out first and Mike Keeton right behind and Harris closing in already. Mike Keeton was leading but Harris was right there as the laps clicked away Harris was getting stronger. Jerald Harris moved to the front spot leaving Keeton to deal with a charging Mike Leraas after he got by Bill Rice. With laps running out nobody would catch Jerald Harris as Mike Leraas made it to second but would only stay there as Harris went under the checkered flag for the second time of the night. At the line it was Jerald Harris, Mike Leraas, Mike Keeton, Bill Rice, Daren Bolac, Matt Mullins, Chris Ware, Charlie Ware, Billy Hubbard and Mike Cicchillo. The VSS is off next week before heading to The Greater Cumberland Raceway in Cumberland, Maryland for a race with The Laurel Highlands Sprint Series on Saturday October3rd.
Thanks for your support Jim Haines Virginia Sprint Series
IMCA RaceSaver Sprint Series