HANSON WINS AT THE GROVE 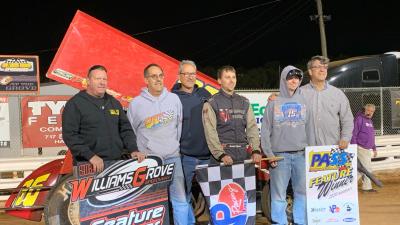 HANSON WINS AT THE GROVE

Sometimes a win is more than just a win:

– Like when the driver wins for the first time in more than five years and has only recently became a new father;

– Like when the owner wins for the first time in 44 years at the track and is in the pits on his stepson’s wedding weekend;

– Like when it all happens at Williams Grove Speedway.

Jaremi Hanson’s win at Williams Grove Speedway Friday night met all those criteria, leading to an outpouring of congratulations for him and car owner Rod Ort, also director of the PA Sprint Series.

Hanson said in victory lane that he wasn’t nervous “at the beginning” about his prospects for a win (because he was starting on the pole), but the last restart with two laps remaining changed that.

“That last caution,” he said, “I saw the 67 (Duke) there, and I knew that, if I would have screwed up at all, he would have gone right by my there on the bottom, so a lot of pressure there.”

With his young daughter in attendance and his long victory drought ended, Hanson summed up his feelings:

“I think I’ve been coming here for almost 60 years,” he said, “because my parents brought me here when I was just a baby, and racing here since 1976, and wanted to win, just have never been able to get it done.”

Ort had come close as a driver himself and with others who had driven his car.

“I’m so thrilled that Jaremi finally pulled it off tonight – it’s unbelievable.”

Ort also noted the significance to any driver of winning at Williams Grove.

“I’ve seen so many people here win and wish it could be me, but I’ve always celebrated with them, because it feels so good to see other people win and reach their dreams, and to finally get it – especially here at the Grove with Jaremi – it’s definitely emotional. It’s as good as it gets.”

As good as the night was for Hanson and Ort, there was disappointment in the pit area afterward as well. National IMCA/RaceSaver points leader Garrett Bard was involved in a heat race incident and had to come from seventh starting position in his B-Main to earn a spot in the feature with a pass at the checkered flag. Then, he was the second car out of the feature.

On lap 14, Dustin Smith spun in turn two, did a 360, and kept going, but the bottleneck that created put Dustin Young in the inside backstretch wall.

The final caution, for Johnny Scarborough’s spin on lap 17, led to a restart that brought several cars together in turn two, ending Devon Adams’ night and causing others to lose multiple positions. The field remained under green, though, setting the stage for an exciting finish between Hanson and Duke.

Heat races for the 44-car field went to Duke, Jared Zionkowski, Kirsten Hess and Jacob McClain, who had come all the way from Hemby Bridge, N.C., for the race. A couple of red flags and several yellows interrupted the heat race action, but no injuries were reported from any of the incidents.

On a night with cold temperatures, a wind one All Star competitor said he thought would blow him over on the backstretch, and a difficult, slick track, there was still plenty of passing, and Austin Graby won the Hoosier Tire Mid-Atlantic Hard Charger Award (and a new right rear tire), coming from 26th and last starting spot to 10th at the finish.

Tom Carberry and Dustin Smith each advanced 11 positions during the race, Erin Statler moved up 10 spots, Landon Price improved by 9, and Dave Brown and Kassidy Kreitz each came up eight spots.