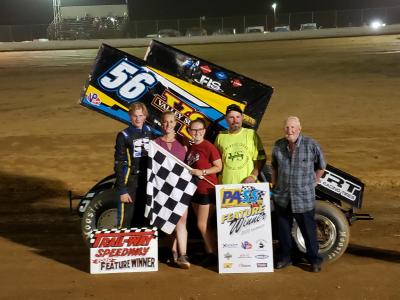 Jake Frye might wish the PA Sprint Series ran at Trail-Way Speedway more often. A year ago to the weekend, the Lewisberry racer, still one of PASS’ youngest, equaled his best career finish – 2nd place – when the series stopped at the Hanover oval.

Friday night, he topped that.

The fifth-place finisher in the national 2019 IMCA/RaceSaver rookie-of-the-year standings scored win #1 in the 25-lap feature in his Valley Supply/RS Mechanical Service #56. It was his 42nd PASS start.

That’s how they stayed, as Frye handled lapped traffic with ease, while Dodson blew a brake line on lap 13, handicapping his effort. He was still able to hang on for his third straight runner-up finish.

Heat races for the 14 cars on hand were won by Scarborough and Frye.

For the latest schedule and other updates, check the www.pasprintseries.com website or the PA Sprint Series Facebook page.