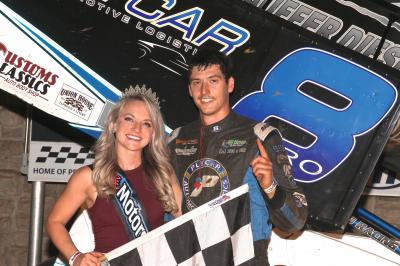 Sweigart, who started fourth and took the lead from Ron Aurand on lap five, was never seriously challenged after that, working lapped traffic perfectly in his A.H. Moyer/Buckwalter Trucking/Gator Truck Sales #8. The win was his second of the year, coming after last weekend’s victory at Port Royal Speedway, and his seventh overall with PASS.

“I didn’t really know where I needed to be, top or bottom,” Sweigart said in victory lane of the lapped traffic situation, “so I was kind of floating back and forth, and I figured I’d run the top until I felt pressure, and I really didn’t feel any pressure – I guess it was more mental pressure at that point, so I just decided to go to the bottom and commit there.

“I didn’t feel like I wanted to push too hard the last couple of laps with the lapped traffic, I didn’t want to get myself into an incident there, so I just kind of eased up a little bit, and we’re here – it all played out.”

While Sweigart was all but cruising out front, a torrid battle was going on for second place, where Kassidy Kreitz held off IMCA/RaceSaver national champion Ken Duke to notch a career-best finish (although she had won the Founders Cup for Keystone RaceSaver Challenge non-qualifiers twice). Duke’s third, combined with a second the night before at BAPS Motor Speedway, gave him the best overall weekend showing.

Landon Price, the only other driver who finished in the top five both nights, was fourth, and Aurand took his first PASS top five in nearly two years with fifth.

Dominic Melair, Erin Statler, Devin Adams, Derek Hauck and Johnny Scarborough rounded out the top 10. Melair’s sixth was his best showing in nearly a year, and Statler had her third top 10 in the last four races. Adams was the evening’s Hoosier Tire Mid-Atlantic Hard Charger, coming from 17th starting position to eighth. Hauck had his fourth straight top 10, and Scarborough had his third straight top 10 at Selinsgrove.

Heats for the 31 PASS/IMCA/RaceSaver sprints on hand were won by Hauck, Statler (her third weekend in a row with a heat win) and Duke, with Kyle Keen taking the B-Mail (and then charging from 19th to 11th in the feature).

The B-Main saw the worst incident of the night, when Cassandra Minium lost the steering on her #21M, made contact with other cars and crashed hard into the infield wall. A water barrel positioned for just such a crash lessened the impact, but after she was checked out by the track safety crew, family members transported Minium to a local hospital for a possible knee injury.

This Saturday night, PASS makes its first appearance of 2020 at Lincoln Speedway, joining the 358 sprints, who are running a Summer Series event. The 600 Xcel modifieds and extreme stocks also will be on the program, which will begin at 7:30 p.m.

For the latest schedule and other updates – or to listen to the PASS podcast – go to www.pasprintseries.com or visit the PA Sprint Series Facebook page.