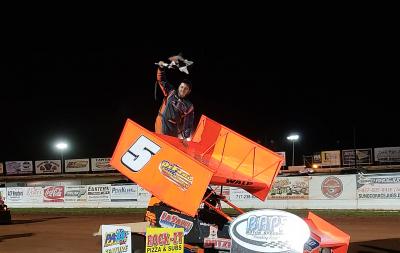 All John Walp wants is a little improvement – from his second-place finish in BAPS Motor Speedway’s standings for PA Sprint Series IMCA/RaceSaver sprints in 2019 to first in 2020. He’s off to a solid start toward that goal.

Walp wired the field to win the 20-lap PASS feature Saturday night at BAPS, placing himself atop the track’s standings for RaceSavers after a COVID-19-delayed season opener for the division at the track. The Wapwallopen driver has now scored two of his three career PASS victories at BAPS in his LaSalle Racing Engines/Defebo Graphics/Dotzel Trucking & Topsoil/Whitebread’s Racing Products/Racers New & Used Parts Warehouse/Newlin Bar Service/John & Karen Matrafalio #5 sprinter.

Walp gave credit to LaSalle in particular for the engine in his car, and in victory lane, he noted that he was able to keep the car low on the track and thwart efforts by IMCA/RaceSaver 2019 national champion Ken Duke to move up. The track was slick and tricky, with drivers having to “slow down to go fast,” Walp was able to extend his lead after every caution during the feature.

Duke ran second the whole race and clearly had a strong car, but he couldn’t get by Walp. Still, the second was his best PASS finish of the young season, and coming at a track where he has not enjoyed his most consistent top results, that’s encouragement.

Heats for the 34 RaceSaver sprints on hand went to Johnny Scarborough, Price, Brown and Duke, with Ian Detweiler capturing the B-Main. Detweiler, who was making his first run of 2020, also took home the Auto Core Recycling Hard Charger Award, coming from 21st starting position to finish 13th. “Nitro Nick” Sweigart also put on a notable charge from 23rd to 16th.