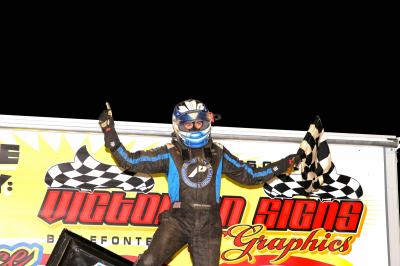 “Nitro Nick” Sweigart made up for a couple of early season disappointments with a dominating wire-to-wire win in the 20-lap PA Sprint Series feature Saturday night at Port Royal Speedway.

The Myerstown racer took advantage of drawing the pole starting position and put his A.H. Moyer/Buckwalter Trucking/Gator Truck Sales #8 in victory lane for the first time in the late-starting 2020 season. Sweigart had looked headed for victory in the season opener at Selinsgrove before engine troubles spoiled that outing, and an early race accident sidelined him last week at the Port. A third place at Selinsgrove in between was the year’s highlight before Saturday.

The win was hardly a gimme, though. Last week’s Port Royal winner, Garrett Bard, started 10th, got all the way to fourth on the opening lap, then took the runner-up spot on lap 11 and began to pressure Sweigart in lapped traffic during the caution-free race. Sweigart responded, though, and was 1.5 seconds ahead at the checkered flag. Bard’s finish gave the Wells Tannery driver two wins and two seconds in five PASS starts, plus another IMCA/RaceSaver win outside the region.

Jake Frye, Christian Rumsey, Erin Statler and Tom Carberry rounded out the top 10. Frye, whose sponsor Valley Supply also sponsored the evening’s program, was fighting for third on the final lap when he made contact with the outside wall and limped to the finish.

Devin Adams also mounted a notable charge, coming from 23rd at the start to 13th after racing from 11th to third in the B-Main.

The somewhat slick track surface required different tactics than for the previous week, and in particular, drivers had to finesse the top line.  Passing was still the order of the day; Rumsey having shown that emphatically by coming from 10th to third in his heat. The season-opening Selinsgrove winner also had the fastest car in warm-ups.

With 41 PASS sprinters on hand, qualifying was intense, yet incident-free. McVay, Grube, Statler (her second heat win in two weeks) and Carberry claimed the heat races, while Jared Zionkowski won the B-Main, where 17 cars scrambled for six starting positions.

Next week PASS racers have two events scheduled. On Saturday, BAPS Motor Speedway hosts the RaceSaver sprinters for the first time in 2020. Super sportsman cars, late models and street stocks also are on the program. General admission is $15, but anyone from Hanover, Spring Grove or Gettysburg will be admitted free to the grandstands with ID. Students are $5 and kids 12 and under free. Pit passes are $30. Pits will open at 4:00 p.m. and grandstands at 5:00, with racing set to begin at 7:00.

On Sunday, PASS returns to Selinsgrove Speedway to join the 410 sprints for a special program there. Racing is scheduled to start at 7:30 p.m.