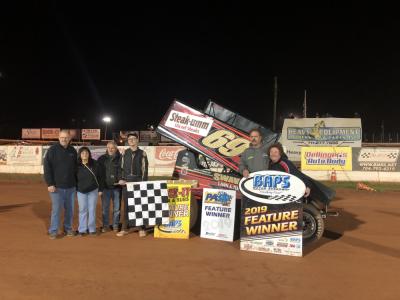 Price, who had advanced from 10th starting spot to third in his heat race, started sixth in the feature, took third from Keystone RaceSaver Challenge winner “Nitro Nick” Sweigart on a lap four restart, outdueled fellow teenager Devin Adams for second three laps later, and, shortly after the lap nine restart from the race’s only other caution, powered past midget ace Alex Bright.

After that, there was no stopping the Steak-Umm/Swavley’s Lawn & Turf/Givlar’s Trailer Sales #69. Price had a 2.261-second lead over Bright at the checkered flag.

“My dad and all my crew had it really set up from the get-go,” Price said in Victory Lane, “and it was just real fun to drive.

“I had an idea,” he said when asked if he thought he could take his second career RaceSaver/IMCA sprint victory. “I knew we were fast (but) I didn’t think we would be here.”

In Price’s brief (two years and 26 previous races) career in full-size sprints, his first top 10 and top 5 had both come at BAPS, but his initial victory came in August at Port Royal. Now the young racer from Fleetwood in Berks County owns a victory at what might be considered his “home track” as well.

Bright, the two-time ARDC midget champ, nearly made his first start in PASS a win, grabbing the early lead from Adams and holding off repeated challenges from that racer, who was hoping to celebrate his 19th birthday with a victory. While the Bell Racing Helmets/PXP Raceware #54 couldn’t stop Price, he had his hands full holding onto second over Adams and fourth finishing Doug Dodson. Sweigart completed the top 5.

Price was one of four drivers advance five positions during the race. The others were Hanson, John Fiore (17th to 12th) and Garrett Bard (18th to 13th).

Heat races for the 19 cars present on a night when feature temperatures were in the low 40s were won by Dodson and Adams.

Newlin also was able to celebrate at the finish, because he captured his fourth straight BAPS points championship for PASS/IMCA sprints. John Walp, who finished 11th in a car borrowed from Kruz Kepner, came home second, followed by Adams, Dodson and Sweigart.

The final PASS race of 2019 takes place tonight at Port Royal Speedway, where the RaceSaver sprints are part of an “Open Wheel Madness” show also featuring 410 and URC/360 sprints. Races begin at 4:30 p.m.