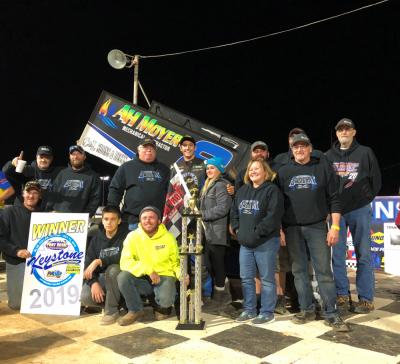 “Nitro Nick” Sweigart saw an opening on the last lap and seized it, passing both cars battling for the lead and holding on to win the 8th Annual Keystone RaceSaver Challenge at Port Royal Speedway Saturday night.

The Myerstown driver, who had started 10th in the “Blue Collar Classic,” had fought his way to third place when Doug Dodson, running second, dove to the inside of leader “Zach Daddy” Newlin in turn two of the 25th and final lap, and Newlin came down to try for a cross-over to re-capture first. Sweigart fired his A.H. Moyer Inc./Ditchcreek Utility Services/C&L Siding and Decks/Lebanon Levi #8 into the narrow space outside of Dodson and went by both cars.

Newlin got to the inside in turns three and four, but Sweigart’s outside momentum and perfect line enabled him to take the checkered flag.

Seldom does a major race live up to its hype, but few in the stands Saturday would likely say that they had seen a better finish in 2019.

Immediately behind the leaders, looking for an opening while engaging in their own battle for position were fourth-place Garrett Bard, the super rookie in the CG Racing Engines/Lias Tire #95, and New Yorker Christian Rumsey in the Behrents Performance Warehouse/DRP Shocks/CG Racing Engines #1R. They had charged to the front from ninth and 11th place, respectively.

But those charges were nothing compared to that of newly crowned IMCA/RaceSaver National Champion “Iron Man” Ken Duke Jr., who finished sixth after starting 21st in the Fairfield Chevrolte/Apache Tree Service/sprintcarunlimited.com #67. Duke’s run also celebrated his second points title with PASS and his Pennsylvania state championship.

Founding out the top 10 were Kevin Nagy, Jeff Geiges (from 16th starting spot) and Jaremi Hanson (from 14th).

“It all just kind of played out there in that last lap,” Sweigart said in Victory Lane. “Those two guys were in a helluva race the entire race, and it’s just racing, they were trying their best, and I was sitting back there in third, could see what I needed to do, and it all worked out.

“I knew we were right there, and we just needed something to go our way, and that’s all we needed. I definitely had the car, the crew had it hooked up, and it all panned out.”

With 50 cars in the pits for this year’s race, the annual Founders Cup race for non-qualifiers also was good one, with the race’s defending winner Kassidy Kreitz providing an ending that all but equaled that of the feature.

Pole-sitter Drew Ritchey raced out to a nearly two second lead in the 15-lap event, only to have third-starting Kreitz reel him in over the final five laps. On the final lap, the two leaders needed to lap a slower car, and when Ritchey went high, Kreitz dove low and came out ahead on the final run down the straightaway.

“I really wasn’t sure,” Kreitz said in victory lane. “I knew it was going to be close, but I think that lap car held him up, and it definitely helped me there.”

Following Kreitz and Ritchey across the line were Jay Krout, Ohio’s Justin Clark and Wally Eshenaur.

Earlier in the evening, heat races for the field, which included drivers from six states, were won by Nagy, Rumsey, Sweigart, Erin Statler, Kruz Kepner and Scott Frack. Twin B-Mains went to Kyle Keen and Adams.

Despite the hard-to-top-that excitement for the Keystone RaceSaver Challenge, the PASS season still has two races to run this weekend. On Friday, the sprinters will join street stocks, extreme stocks, legends, road warriors and Pennmar cars for the first night of the 16th Annual Sunoco/Insinger Performance Nationals Fueled by Miller’s Racing Parts.

PASS returns to Port Royal Saturday night for the season’s third Open Wheel Madness program, featuring 410 and URC/360 sprints along with the IMCA/RaceSaver 305s. Racing is set to begin at 4:00 p.m.

Several other awards and honors were given during the Keystone RaceSaver Challenge program. See the PA Sprint Series Facebook for more details, or go to www.pasprintseries.com.