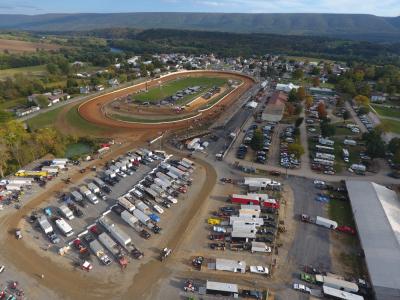 With barely a week to go before the most anticipated race of the season for RaceSaver sprint cars in Pennsylvania and surrounding states, more than 50 cars have already preregistered for the Keystone RaceSaver Challenge on Saturday, October 12, at Port Royal Speedway.

Here’s an indication of how competitive the event known as the “Blue Collar Classic” of affordable racing will be: those drivers have accounted for 29 PA Sprint Series wins in 2019, along with numerous others in the Mid-Atlantic Sprint Series, Laurel Highlands Sprint Series, Alleghany Sprint Tour, Ohio Thunder Sprit Series and Virginia Sprint Series.

Leading the group is ”Iceman” Ken Duke Jr. of Selinsgrove, the 2019 PASS Champion and probable national champion for the IMCA/RaceSaver Sprints. Duke has won eight PASS features this season and two with Laurel Highlands.

Defending PASS Champ “Zach Daddy” Newlin of Millerstown, who finished second in this year’s points and also is in the top five nationally, has won four events in the series, as has red-hot rookie Garrett Bard of Wells Tannery, who only began racing with PASS in July. Second-year driver Devin Adams and young veteran Drew Ritchey have three PASS wins apiece, with Ritchey also having won four Laurel Highlands features.

The action-packed day of racing also will include Mason-Dixon Limited Late Models, Xtreme stocks and 4-cylinder pure stocks. Racing will begin at 4:30 p.m., with sprint car heats, B-mains and feature leading the order of racing for each category throughout the evening. Gates will open at 1:00 p.m.

For more information, go to www.keystoneracesaverchallenge.com, pasprintseries.com or the PASS Facebook page.