Championship on the line at Hagerstown Speedway 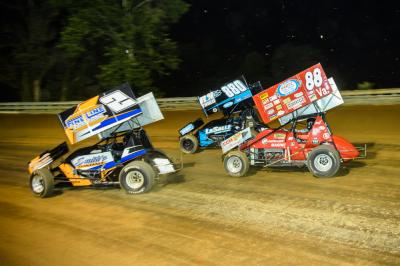 Championship on the line at Hagerstown Speedway

The same holds true Sunday night at Hagerstown Speedway, when the Virginia Sprint Series will host the racing, with co-sanctioning by both PASS and LHSS.

Entrants for both nights will include national RaceSaver points leader Ken Duke Jr. of Selinsgrove and runner-up Scott Lutz of Jonestown. Going into the weekend, Duke leads Lutz by 12 points in the national standings, so there is ample opportunity for things to change. Also, these are the final 2019 national points races for both series, and drivers who wishing to pursue more points before the September 29 close for this season will have to venture to Western Pennsylvania, Delaware or North Carolina next weekend.

Zach Newlin of Millerstown, defending PASS champion, is fourth in national points, third in Pennsylvania, and second in PASS. He also is expected to race this weekend.

No Pennsylvania driver has ever been crowned national IMCA sprint champion.

Also heating up as the season nears its close is the race of IMCA’s national rookie-of-the-year, and there three of the top four contenders should be in competition this weekend. In RaceSaver(R) Bedford, Hagerstown races

Texan Ronald “Trey” Burke currently leads the national rookie points, but he is closely followed by Pennsylvanians Doug Dodson of Middletown, Dylan Proctor of Lock Haven and Jake Frye of Lewisberry. A strong weekend could thrust any of those three closer to the national rookie title.

(Note: Even though the IMCA/RaceSaver points race ends on September 29, a bonus points system will later add to each driver’s total based on strength of schedule and other factors.)

Of course, a healthy field of other PASS, LHSS and (at Hagerstown) VSS racers will contest the would-be champions at every turn. In particular, watch out for Drew Ritchey of Everett, who has won twice this year in LHSS races at Bedford, and red-hot rookie Garrett Bard of Wells Tannery, who has three wins in barely two months of PASS competition, as well as an LHSS win the last time the series came to Bedford.

Some PASS veterans have experience at Bedford when it ran under PASS sanction, prior to LHSS’s establishment. PASS Regional Director and car owner Rod Ort collected his first career victory as a driver in the first RaceSaver event run at Bedford in 2003.

In Hagerstown’s four previous RaceSaver events this year, drivers from each of the three co-sanctioning series have celebrated in victory lane.

The PASS/LHSS contest at Bedford is part of the second night of the Bedford Fall Fest races and also will include late model sportsman cars, pure stocks and 4-cylinders. Racing is scheduled to begin at 6:00 p.m., and adult general admission is $15.

At Hagerstown, PASS will be supporting Tony Stewart’s Ollie’s Bargain Outlet All-Star Circuit of Champions. Racing is set to start at 7:00 p.m., and tickets are $25 for adult general admission, or $20 for students, seniors and military.

Next weekend’s events also are the final races for PASS before the 8th Annual Keystone RaceSaver Challenge, the “Blue Collar Classic,” at Port Royal Speedway on Saturday, October 12. This race draws competitors from across the region and already has nearly 40 entrants, with only a handful of those being drivers who are not at least semi-regulars with PASS. The day’s racing also includes Mason-Dixon Limited Late Models, extreme stocks and 4-cylinder pure stocks.

For more schedule or other information, visit www.pasprintseries.com or the PASS Facebook page.