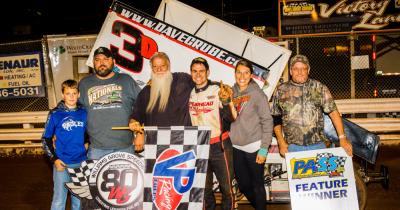 Dave Grube alluded to his tough 2019 season (“We tore up a bunch of cars this year.”) and his father’s resolve that the team “finish the season strong.”

Fortunately, he was able to relate those comments from Victory Lane at Williams Grove Speedway.

Grube made a fourth-lap pass to take the lead from one of the late season’s hottest drivers, rookie Garrett Bard, and held off challengers including another strong rookie, Dylan Proctor (second in national IMCA rookie points) and “Iceman” Ken Duke (IMCA/RaceSaver national points leader) to claim his first win in more than a year in the 20-lap PASS feature.

Proctor matched his career-best finish from July 26 at Clinton County Motor Speedway near his home of Lock Haven. His Randy Sterling Trucking/M. Teats Transport/Sprint Fleet Services #92 actually traded positions with Grube in the opening laps. Duke, who had won his heat race in his Fairfield Chevrolet/Apache Tree Service/sprintcarunlimited.com #67, drew 12th starting position for the feature but charged to third and fell just a few laps short.

That finish gave Adams the Hoosier Tire Mid-Atlantic Hard Charger Award for advancing 11 positions. His higher overall finish was the tie-breaker for the award with Erin Statler, who also advanced 11 spots from 23rd starting position to 12th.

Rounding out the Top 10 for the feature were Ryan Lynn, Scott Lutz, Jeff Geiges, Kassidy Kreitz and Scott Ellerman.

Pole-sitter Bard had just lost third place to Duke on lap 12 when he experienced sudden electrical problems and slowed in turn 2. With no place to go, fifth-running Drew Ritchey hit the side of Bard’s car and then collected Doug Dodson, who was in sixth. All three cars retired from the race.

Heat races for the 35 PASS sprinters on hand went to Bard, Proctor, Ritchey and Duke, with Keith Prutzman taking the B-Main. With the large field and the need to finish in the top three of a heat to qualify for the feature re-draw, there were some impressive charges to the front: Geiges came from 9th to 2nd in his heat, and Dodson advanced from 8th to 3rd. Steve Surniak (who had come all the way from North Carolina), advanced from 11th to 2nd in the B-Main.

Larry McVay cleared the fence in turns 1 & 2 in warm-ups. His car landed upright and did not flip, but the damage sidelined the New Jersey racer for the night.