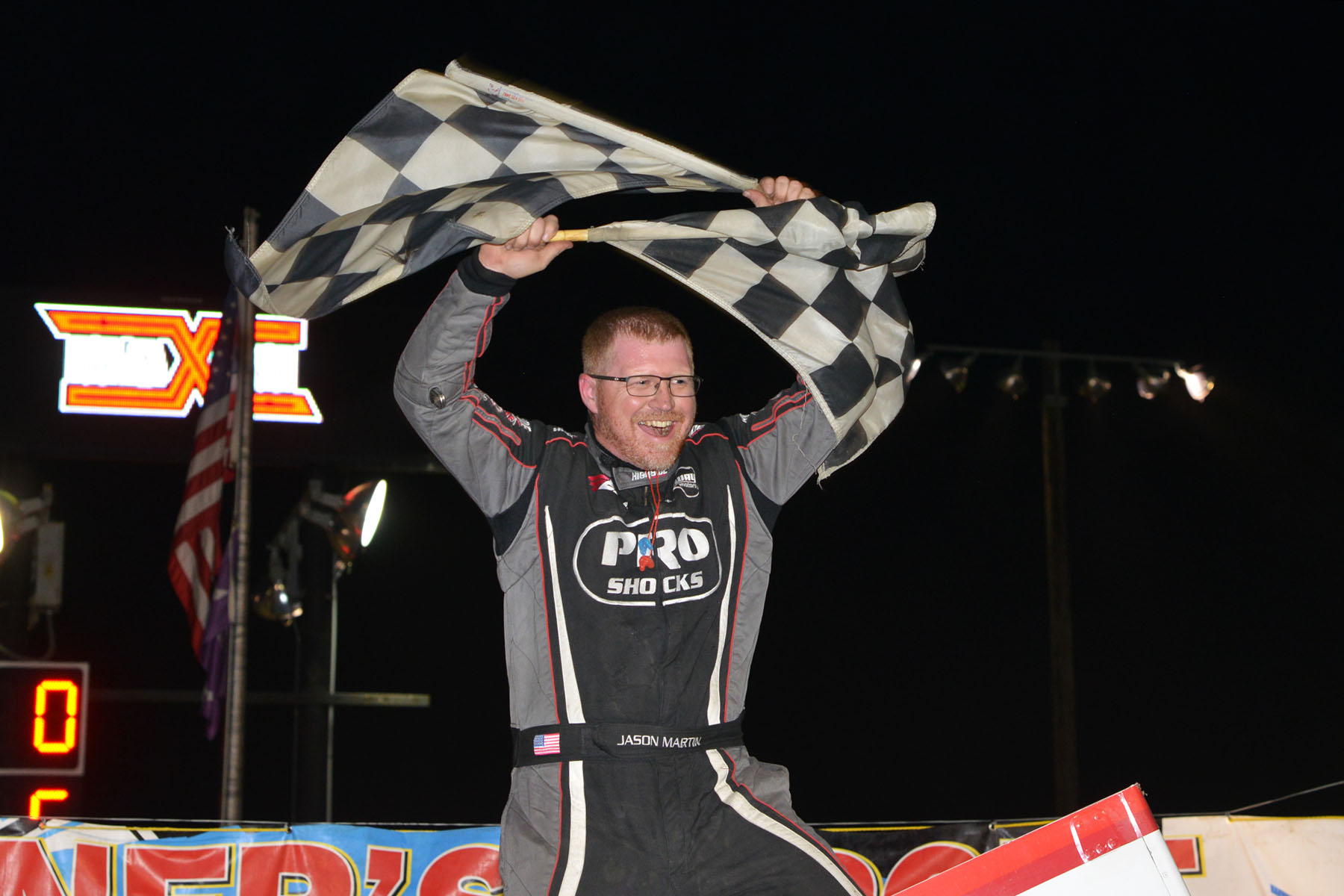 We’ve all heard the expression “I went to a race and a party broke out”. Well, last night at Eagle Raceway it was just the opposite. The final night of the IMCA Sprint Car Racesaver Nationals, presented by Precise Racing Products saw a near capacity crowd enjoying fantastic racing on a great track surface.

In the F Feature for the Racesaver Sprints Trey Burke’s 3 and the 22H of Rod Henning made contact, sending Burke flipping. Neither driver was significantly injured.

The good news of the night was that John Webster, who had been transported to the hospital the previous evening not only returned to race Sunday but won the F Feature!

The Valentino’s IMCA Hobby Stock A Main saw Mike Hansen in the 94 lead lap 1 with Dave Carter’s 2C, the 6R of Roy Armstrong and Adam Wasserman’s 41 rounding out the top 4. Jeff Watts put the 66 in fourth on lap 3. The next lap saw the 79 of Ryan Sutter spin out in turn 4 for a caution. Khrysta Stransky looped it in turn 4 on lap 4 to slow the action again. 1 lap after the restart Carter got past Hansen for the lead. Watts moved up to second on lap 8. Hansen and Armstrong got together with 9 to go and stopped on the back stretch. Hansen headed to the pits, but Armstrong tagged the field. This put Jeff Ware’s 83 third and the B4 of Ben Becher fourth. One circuit after the restart Sutter moved up to fourth. Ware passed Watts the next lap but lost the spot back to Watts after another circuit. Ware snagged third for good with 3 to go. That made the top 4 Carter, Ware, Watts and Sutter.

This was Carter’s first Eagle Raceway victory since 2017. “I was just trying to stay close and make sure I was doing good. I started getting some really good bite and we just took off from there. I want to thank my wife and kids for helping out and letting me race”. Carter’s sponsors include Sardeson Racing, Big Daddy Chassis and Village Pointe Toyota.

As the fans waited for the cars to come out for the finale, they were treated to a way-back machine of sorts as the announcers got everyone up to do the YMCA, stomp their feet to ‘We will rock you’ and dance to ‘Thunderstruck’. When the lights went out, the complimentary glow sticks were lit, and the spotlight shone on the 27 drivers who were set to take off in the unique 3-wide start. By that time the crowd was at a fever pitch and the racers delivered what everyone had waited all night to see.

The start of the race saw a big pile-up on the front stretch after Michelle Melton’s 21 bounced off the retaining wall and made contact with the 40X of Toby Chapman, causing him to turn sideways and collect the 44 of Jason Howell, the M1 of Keith Martin and Adam Gullion’s 91JV. None of the drivers were seriously injured, but Howell’s ride ended upside down and he was done for the evening. Jason Martin took advantage of his starting spot in the middle of row 1 to grab the lead when a lap was officially in the books. Kaleb Johnson’s 22, the 95 of Trevor Grossenbacher and Jake Bubak’s 74B rounded out the top 4. Shon Pointer’s 20P stopped in turn 2 on lap 2 for another caution. The next 18 circuits saw non-stop racing as the leaders dealt with lapped traffic every inch of the way. Jake Martens passed Bubak on lap 7 to grab fourth, then moved up to third on lap 11. Bubak passed Martens and Grossenbacher on lap 17 to move to third with Martens holding fourth. Martens spun out in turns 3 and 4 with 11 to go, moving Grossenbacher into fourth. Grossenbacher moved to third on the restart and advanced to second 2 laps later. The last change in the top 4 came with 7 to go as Bubak moved back to third. The final top 4 were Martin, Grossenbacher, Bubak and Johnson.

This was Martin’s second victory at the IMCA Sprint Car Nationals after he finished a very close second last year. He said “I’m super proud to do this. We finally got a second one! Last year we….I don’t know if I should say we let one go or whatever, but we didn’t get the job done last year and that really kind of ticked me off all year. I kind of had a chip on my shoulder. Jake’s kind of been a thorn in my side as well this year. We’ve really, really banged wheels and been really competitive with him, but we just couldn’t quite get the job done, so I’m really, really proud to get this second win at the Nationals. I knew that the start was going to be crucial because Jake sets a pretty torrid pace. I knew that there was water on the bottom of 3 and 4, so I kind of pushed Kaleb up a little bit, held my line and made sure that I was out of the water and that maybe Jake was going to stay in it. That really was the key for me to get a good start. That was a long race and the racetrack changed a lot. Early on it was pretty good and then it got pretty slick there towards the end, getting into turn 3 especially. I can’t say enough about my guys! We had a set-up and a plan coming in here tonight and about 5 minutes before the race Roger started working the track. He worked it more than I thought he was going to, so we ended up throwing a curve ball at the car and we ended up good. I have to thank Craig Meyers for providing me the best motors that money can buy”. Martin’s sponsors include Trucks Plus, Midwest Linings, Peterson Automotive in Shenandoah and Meyers Racing Engines.