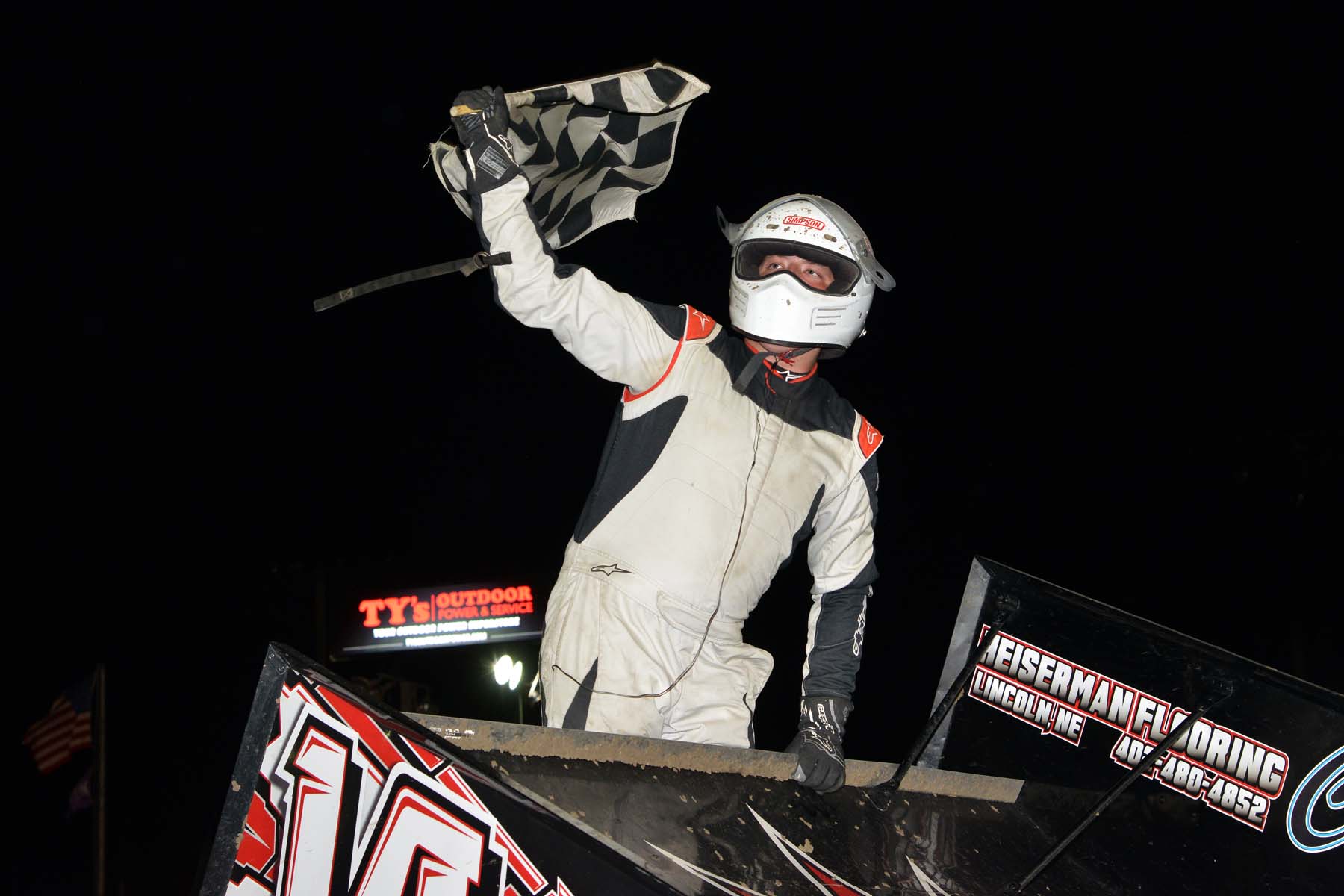 Saturday night at Eagle Raceway the word was “Swell”! Party On Night, presented by Budweiser saw ‘swell’ weather; in fact, it was nearly a perfect evening for racing. The large crowd ‘swelled’ the stands with eager race fans and 149 cars ‘swelled’ the pits with anxious race teams, eager to hit the high banks.

Nate Weiler put the 4W out front on the first lap of the Duros Dent Works Racesaver IMCA Sprint Car A Feature. Nick Bryan in the 52, Dan Neckolite’s 22D and the 12N of Neil Nickolite rounded out the top 4. Nickolite did a 360-degree spin in turn 2 on the second lap, giving the fourth spot to Toby Chapman’s 40X. Adam Gullion used the restart to fly around the top and put the 91JV into second with Chapman third and Bryan fourth. Chapman passed Gullion for second on lap 4 as Mike Boston put the 51 into fourth. Mike Houseman’s 4L came to a halt in turn 4 on lap 6 to light the yellow lamps in the corners. Joey Danley took advantage of the restart to put the 14 into 4 as Gullion passed Chapman for second. Chapman got back past Gullion the next lap and took over the lead on lap 11. Danley moved up to second the next lap. Danley got around Chapman with 10 to go at Gullion again moved up to third. Weiler looped his racer in turn 1 with 8 to go, collecting Jason Danley’s 4X and the 12 of Tyler Drueke and the action slowed again. That put Boston back into fourth. Boston took over third with 8 to go but lost the spot back to Gullion the next time around. Chapman slowed with a flat right rear tire with 5 laps left, giving the fourth spot to Trevor Grossenbacher’s 35. Grossenbacher moved to third on the restart making the final top 4 Danley, Gullion, Grossenbacher and Boston.

“It’s been a little bit of a struggle this year, but we righted the ship tonight I think. The yellows helped a ton! I got up to fifth pretty quick. The leaders were really battling each other, and I managed to squirt by there and kind of took off from them after that. It was a blast watching the leaders race, and when I got to them it was even more fun being able to drive by them. I’m not quite used to that this year” he related. I asked if tonight was a good tune-up for the IMCA Sprint Car Racesaver Nationals in 2 weeks and he said, “I think we’re ready to go now, hopefully”. Danley’s sponsors include Empire Fencing, Russell Shoulders Race Engines, Nissen Hardwood Floors and Automotive Services.

Next weekend is Last Call! Season finale presented by the Nebraska Lottery and Coors light. It is the final regular season race for 2019 and will decide the points champions in all classes.