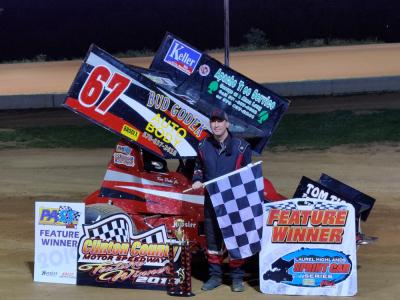 The Selinsgrove racer, who has led the national RaceSaver/IMCA points for much of the year and remains in contention for the national crown, took his sixth PASS event of the season and third at Clinton County in the Fairfield Chevrolet/Apache Tree Service/sprintcarunlimited #67.

Most of the race was a dogfight between Duke, pole-sitter John Walp (Wapwallopen; GMS Piling Products/La Napoli II Pizza/Dotzel Trucking #5) and outside front-row starter Dylan Proctor (Lock Haven; Randy Sterling Trucking/M. Teats Transport/Sprint Fleet Services #92), with Proctor leading the most laps but all three drivers taking turns at the front. After Duke, who had started third, grabbed the lead for the final time, Walp spun and had to restart in the rear.

Heat races for the 15-car field were won by Ian Cumens (Downingtown; Out wash LLC/Able Brothers Truck Towing/Keystone Tree & Turf #79) and Lutz, who also was the night’s big mover, advancing from 11th starting position to fifth.