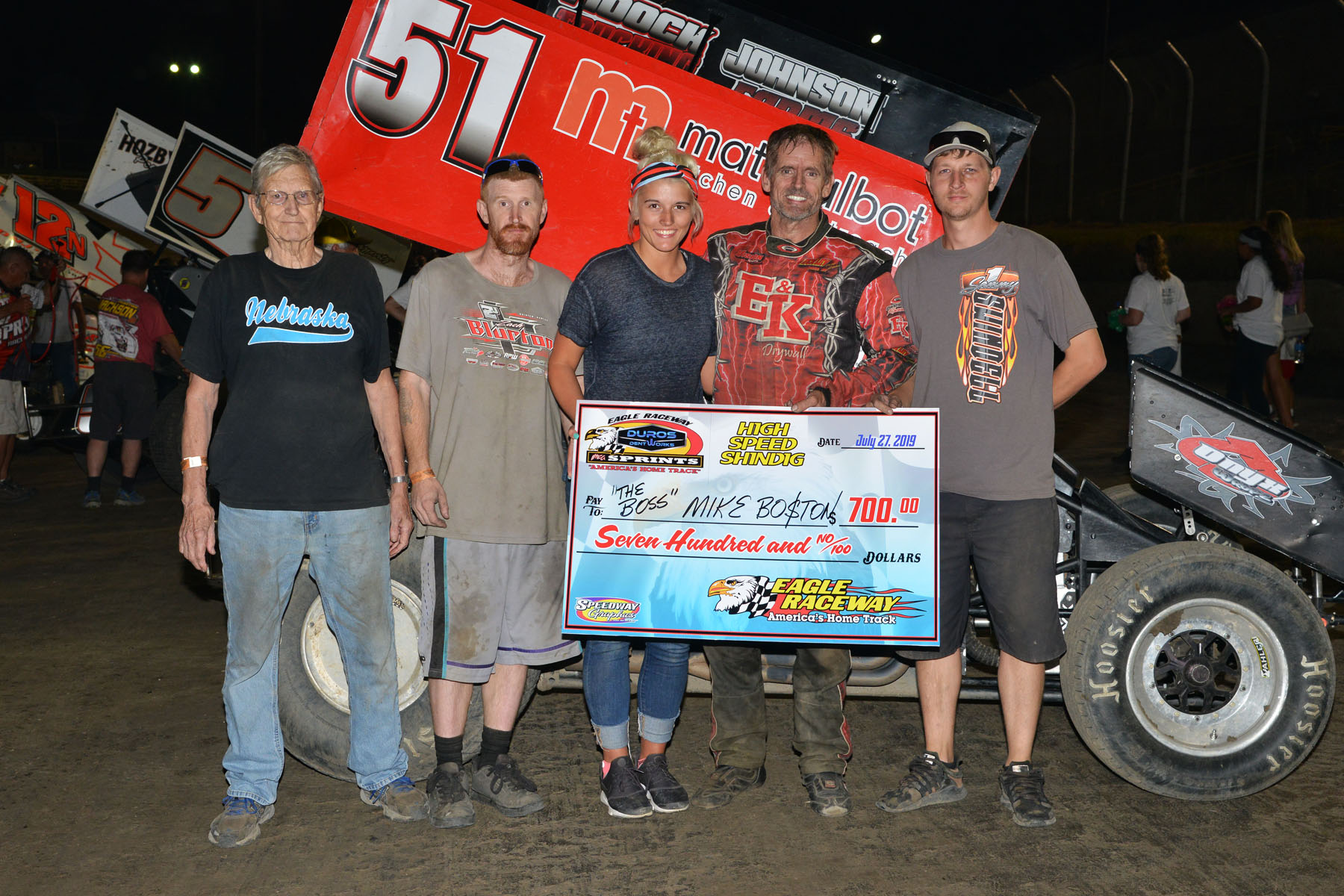 Saturday evening saw a large crowd in the stands for the High Speed Shindig, presented by Froggy 98. Action kicked off under partly overcast skies at 6:30 with 15 heats, 3 B Features, 5 A Features and the fans were filing out at 10 PM.

The only serious incident came in the second heat for the Duros Dent Works Racesaver Sprints when Tyler Drueke’s car flipped several times in turn 1. He was not seriously injured, but his racer was damaged too badly to be repaired.

The final main event for the evening was the Duros Dent Works Racesaver IMCA Sprint Cars. The 12N of Neil Nickolite led the field after the first lap followed closely by Mark Vanderheiden’s 15V, the 1B of Brandon Horton and Tim Hilfiker’s 20. Shayle Bade’s 03 made contact with the Armco barrier in turns 3 & 4 and ended up rolling over, turning on the red lights in the corners. She was not seriously injured but the car suffered too much damage to repair in time to return to the race.  Andrew Jackson spun the 5A in turn 2 on lap 5 for a caution period. Mike Boston took over the fourth spot in his #51 on the restart. Horton grabbed second on lap 7. Hilfiker looped it in turns 1 and 2 the next time around. Boston jumped up to second a lap after the restart as Vanderheiden held onto third. Boston passed Nickolite for the lead 2 laps later as Joey Danley put the 14 into fourth. Danley passed Vanderheiden for third the next lap and Stu Snyder also got past Vanderheiden the next lap putting the 5 into fourth. Danley and Snyder both advanced one spot in the closing laps but could not catch Boston who was pounding the cushion at both ends of the track. At the checkers it was Boston, Danley, Snyder and Nickolite.

This was the first victory for Boston at Eagle Raceway this year. He said “We’ve been good most of the year so far. We went down and put the car on a chassis dyno three weeks ago. We have had some mechanicals lately though; the generator on the magneto and last week we had a push rod go bad. We’ve been good, but just have had some bad luck. I’ve got to give a big thank you to Zach Woods at Speedway Engines. He’s been with me for probably 20 years and we’ve won a lot of track championships. I can’t thank him enough. He was on vacation last week and we took the engine to him Tuesday, he got back Thursday and we got it back Friday. I also want to thank Matt Talbot Kitchens here in Lincoln, they’ve been great to work with. My girlfriend Amber Smith, my daughter Shelby and my son Jordan all help me so much with the car. My Dad and I have raced together for 45 years. He’s 81 years old and still out here helping me. I have to thank the fans because without them we wouldn’t be standing here doing this interview. I don’t want to forget Tom Grasso. The tragedy he suffered with the loss of his son Jimmy is terrible and we all miss having them out here”. I kidded him about running the ‘Boston Line’ and he replied “Yeah, I was banging the wall pretty hard, but never hard enough to hurt the car. I’ve pounded the walls here so many times over the years that I think I’ve probably moved them back a little”. Boston’s other sponsors include Mook Trucking, Johnson Farms, Onyx Wraps and Central Body Shop.