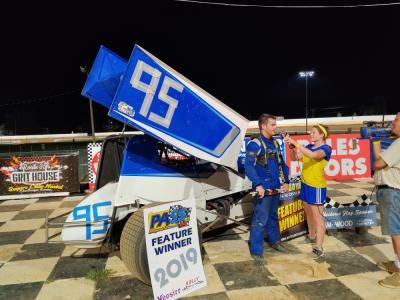 Running high in turns 1&2 and low in 3&4, Adams – who also had been a big mover in his heat, advancing from eighth to second and challenging for the lead before a late caution – worked his way smoothly through traffic in the feature, but on lap 13, Bard caught Ritchey to take second and begin reeling in the leader. On lap 18, Bard made the race-winning move.

The winner’s 305 sprint career has been so brief that his #95 sprinter still has its numbers applied with tape, but fans and fellow competitors certainly will remember them now. In his first PASS start last week at Path Valley Speedway, Bard finished 10th and won the 600cc micro sprint feature that same night. His other two starts have been at Clinton County Speedway, where he finished outside the Top 10 but had Top 5 heat finishes.

The top mover in the feature was Landon Price, who came from 23rd starting position to finish 13th.