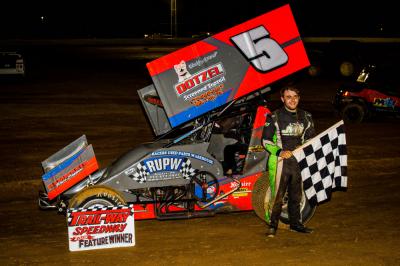 Jake Frye (Shope’s Landscape Maintenance/McCarthy Tire & Auto/RS Mechanical Services #56) closed the gap on Walp over the last five laps of the race but settled for second, the second runner-up finish in the last three races for the Lewisberry high school student.

Starting the race proved difficult, with three efforts ending in caution before half a lap had been completed. On the second attempt, five cars piled up in the first turn, with Keith Prutzman (Hamburg; Buck Rubs Gentlemen’s Club/McKeansburg Bar & Restaurant #28) tipping over. No drivers were injured, but Prutzman and Devin Adams (Lebanon; Fredericksburg Eagle Hotel/Adams Auto Sales/Garden Spot Auto Auction #99A) were done for the night.

Walp and Carberry had started ferocious battles for the lead on each start attempt, but when the fourth try went single-file, Walp was able to grab the top spot. Carberry battled and battled on the outside, pulling alongside Walp several times but unable to make the pass. On lap 20, the New Jersey driver’s extra effort put his car sideways and almost stopped in the second turn, and while he miraculously recovered and only lost three positions, his challenge for the win was over.

Walp and Reinhardt (making his first start of the year after an engine rebuild) claimed heat race wins for the 16-car field. Newlin moved from 14th starting spot to finish seventh, tops among the night’s hard chargers in a race that, after its difficulties starting, went non-stop to the finish.