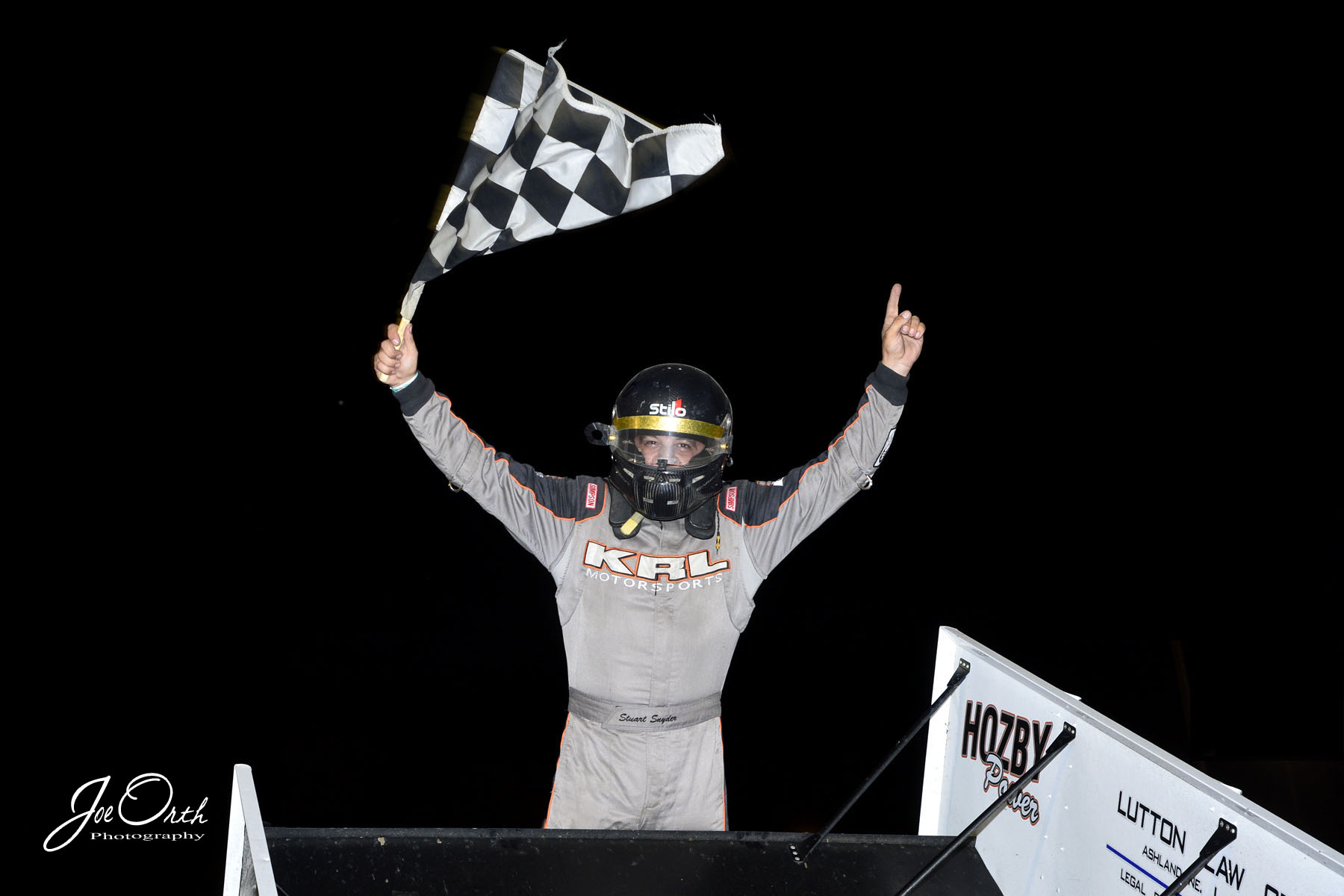 By Greg Soukup
I think that every driver, crew member and even fans have wanted to “get even” with an official at a dirt track at one time or another. Well, last evening at Eagle Raceway they all got their chances!! During Eagle Racing Riot-Fan Appreciation Night water balloons were on sale to benefit the non-qualifiers at this year’s IMCA Sprint Car Racesaver Nationals. Then, at intermission the officiating crew, including owner/promoter Roger Hadan lined up in front of the grandstand and got pelted from every direction.

The Duros Dent Works IMCA Sprint Car A’s first circuit was led by the 1B of Brandon Horton with Neil Nickolite’s 12N, the 57B of Boyd Peterson and Ryan Kitchen in the 21 rounding out the top 4. Kitchen moved to third on lap 2 and Adam Gullion put the 91JV into fourth after another lap. Gullion passed Kitchen after another circuit, moved to third the next lap and advanced to second 2 laps later with Stu Snyder putting the #5 into fourth. Gullion passed Horton the next time around. Nick Bryan’s 52 stopped in turns 1 and 2 on lap 10 and the yellow flag flew. Lap 11 saw Snyder advance to third. Snyder moved up to second the next lap with Kitchen retaking fourth. Kitchen advanced to second the next lap. Tyler Drueke put the #12 into fourth after another circuit. Kitchen looped it in turns 1 & 2 with 9 to go for another caution, moving Drueke to third and Nickolite to fourth. Joey Danley passed Nickolite with 8 laps left in the #14. Snyder grabbed the lead from Gullion with 6 laps to go as Nickolite again moved to fourth. Danley got back past Nickolite 2 laps later and moved to third the next time around. At the finish it was Snyder, Gullion, Danley and Drueke.

This was Snyder’s second victory at Eagle Raceway this season. “That was our second, but the first one was kind of given to us after a disqualification. We started 10th because of our point average. I was kind of trying to judge Horton and Adam to see where they were a little bit better than I was. Then I started smelling rubber, and I learned a long time ago that the left rear tire would start laying rubber before the right rear tires. So, you don’t necessarily have to keep beating down the wall, just move down 1 car lane to get your right rear into that left rear rubber. It usually takes a couple of laps, but it hasn’t let me down yet. That’s just something that I learned a long time ago from Jeff Lowery and I’ve never forgotten it. Adam went to the bottom and I thought ‘I’ve got a shot here. I know he’s in the moisture, but I’m sure there’s a rubber line through the middle. I’ll try that really quick’. We tried it and drove right around the outside of him. We might have touched a little bit, but I thought I was clear. Then it was get into the clean air and just count the lap down, run consistently and hopefully you can pull it off. I’ve got to thank KRL Motorsports for giving me the opportunity to drive for them. They’re basically my second family; I grew up in their shop since I was a year or 2 old. It’s just a great family deal. They gave me the opportunity to drive for them last year, which took the weight off of my shoulders with both my Racesaver team and 360 team. I also have to thank my brother from another mother Nate Weiler for loaning me a spacer for the left rear because I didn’t have one. I think that might be why we won this deal!” said Snyder. Snyder’s sponsors also include KP Designs, Sosebee Motorsports, Hozby Power, Sardeson Racing, Meyers Racing Engines, Momentum Racing Suspensions, JR1 Chassis, Jercro Investments, Lutton Law Office, Speedway Graphics and Smith Repair.

Next weekend at Eagle Raceway is the annual Kids Bike Bonanza, presented by Colby Ridge and Casey’s. Children will have a chance to go home with a brand-new bicycle.