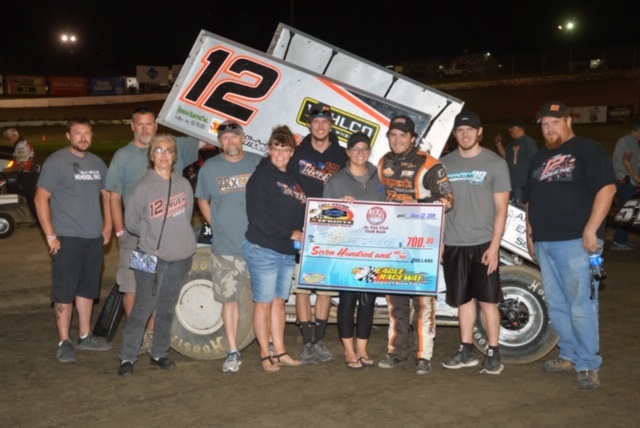 Eagle Raceway, like so many dirt tracks this year has so far has had more than its fair share of rainouts. After having lost last week’s races to rain, Roger Hadan decided to use a contingency plan to allow both the fans and the racers to get their racing in. We all have missed way too many nights at the track, and with so few nights available anyway, this was a perfect solution.

The prospect of racing on Tuesday after a rain-out was proposed years ago, but never was used. But this year, it was a necessity. Therefore, “Party Time Tuesday” was held last evening. Mother Nature tried to intrude again, sending a rain shower through the area in the afternoon, but the Eagle Raceway track prep crew prevailed in the end. Reduced grandstand admission and lowered prices on adult beverages and food greeted the fans.

Joey Danley went for a tumble in turns 3 & 4 of the second IMCA Racesaver Sprint Car heat. He was not seriously injured, but his mount was disable too severely to return to action.

The Duros Dent Works IMCA Racesaver Sprint Car main event was the final contest of the night. Brandon Horton’s 1B, the 12 of Tyler Drueke, Dwight Carter’s 4U and Jason Danley in the 4X were the first four back to the flag stand. Lap 3 saw Neil Nickolite roll the 12N over in turn 3 after contact with another car, collecting the 93 of Ryan King. He was not seriously injured, but the car had to be towed off the track. Drueke took over the lead on the restart as Trevor Grossenbacher put the 35 into fourth. Danley again took the fourth position the next time around but lost it back to Grossenbacher after another circuit.  Lap 8 saw Grossenbacher move up to third. Danley again grabbed the fourth spot on lap 11.  Carter dropped to the infield shortly after that with engine problems, putting Nate Weiler’s 4Winto fourth. Grossenbacher moved up to second with 9 to go. Mike Boston used a huge charge coming out of turn 4 on the final lap to grab fourth in the 51. The final to 4 were Drueke, Grossenbacher, Horton and Boston.

This marked Drueke’s 2nd win this year at the track, after starting in the inside of the second row. He said “I didn’t know how big of a lead I had. I was just trying to keep track of the lapped cars. I knew that I hadn’t lapped Trevor or Mike. I got held up there for a little while and I knew that they had to be coming from somewhere. I was just driving like my life depended on it. Matt, Dustin, Dad, Mom, my brother and Randy all did their jobs and I was just fortunate to get out front. The track started out really heavy, but then it got a little character. The bottom was definitely the preferred line, but I was just good enough on the top to get around a few of the slower cars until I could get down to where I wanted to be. Being versatile and being able to move around was key”. Drueke’s sponsors include Zoz Farms, Drueke Trucking, Gordon Electric Inc., Jeffres Trucking, Cornhusker 800, TD Signs and Graphics, Drueke Ranch, Agri-Builders Inc., Double Z, Angel Energy Services, True Trucking and Danner Spray Foam.

This coming Saturday is the annual Freedom Fest at ‘America’s Home Track’, presented by ATV Motorsports and Duros Dent Works. ATV Motorsports is adding $300 to the driver who finishes third in the ATV Motorsports IMCA Sport Compact A Feature!! Military, Fire & Rescue and Police personnel all will receive $5 front gate admission with ID or if they are in uniform. Lincoln’s premier fireworks extravaganza will be held after the racing is complete for the evening.