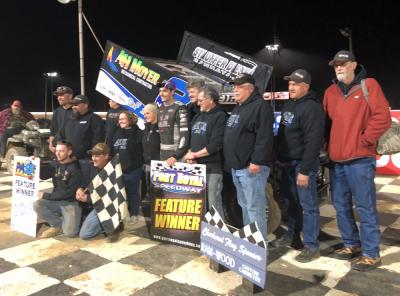 In a performance worthy of his nickname, “Nitro” Nick Sweigart blasted the PA Sprint Series field to earn his first victory since 2017 in the 20-lap feature Saturday night at Port Royal Speedway.

Flying past competitors on the outside from his 10th starting position, Sweigart, from Myerstown, took the lead from Jaremi Hanson of Dillsburg on lap 7 and never looked back, scoring the win with a 1.448-second margin over Jonathan Jones of Irvona, who passed Hanson in the fourth turn of the final lap.

Sweigart raced to seven Top 5 finishes last year, including two runner-ups, but he hadn’t visited victory lane since August of 2017 at BAPS Motor Speedway. He had added two more Top 5s this season and had finished in the Top 10 in all five previous PASS/IMCA events.

Hanson and Hoover started the feature on the front row and waged a classic battle for the early lead, with the former racing low and the latter high, but Sweigart was the racer on the move, going from 10th to 3rd by lap 4, the same circuit Hoover briefly took the lead, only to have Hanson quickly reclaim it. Then, on lap 7, “Nitro” Nick made his move, taking second and then squeezing between Hanson and the backstretch wall.

The race was slowed by caution flags only twice, both times for cars stopped on the track – Kyle Ganoe on lap 1 and Wally Eshenaur on lap 15. The latter set up a mad dash to the finish, with Jones, who had moved from ninth starting spot to sixth, now entering the fray. Last week’s Laurel Highlands and Virginia Sprint Series event winner at Hagerstown quickly advanced to fourth, took third from Newlin on lap 17, then nabbed the runner-up spot on the last lap.

A stellar field of 39 cars was in the pits for an all-sprint-car night at the Port, with 97 sprinters in all, also including 410s and URC 360s. Heat races were won by Ganoe, Jones and Hoover, with Jake Waters and Doug Dodson capturing the two B-Mains.

The night’s most serious incident took place in the first heat, when pole-sitting Samantha Lieberman got sideways coming out of turn 4 and collected Mike Alleman, John Walp and Dave Wickham. Allman and Walp both flipped, and while the drivers were OK, their cars were done for the night.

Finishing 20th in the feature was Jay Krout, who had injured his hand in a hard crash at BAPS Motor Speedway last week. X-rays confirmed nothing was broken, and the veteran gratefully was back behind the wheel.

The series returns to action this Saturday at Path Valley Speedway, when the PASS/IMCA sprinters join late models, 270- and 600cc micro sprints and 4-cylinder thunder cars for an exciting night on the quarter-mile bullring. PASS/IMCA returns to Port Royal on Saturday, May 11.