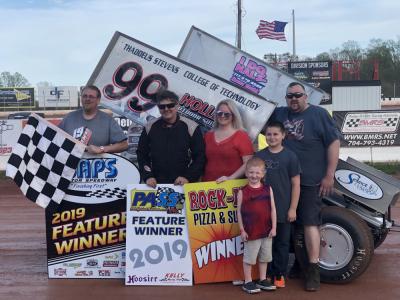 Newlin led all the way to win the regularly scheduled 20-lap PASS/IMCA feature after Reigle led all 19 laps of the evening’s first race, which completed a feature rained out two weeks earlier with one lap run.

In the regular feature, Newlin, of Millerstown, used a high line (high in turns 1&2; even higher in 3&4) and grabbed the lead from fellow front-row starter Walp, with all eyes on Duke, who had come from last to fifth in the first feature and dominated his heat race. The Selinsgrove racer quickly began to move up, but in this race he would not be unable to advance past fourth again, despite three cautions during the middle laps providing restart opportunities. Duke had run all three previous PASS/IMCA features this year.

After the second caution, Ganoe grabbed second from Walp, but the two continued a furious battle until the race’s end, while behind them Duke and Price were just as hotly contesting fourth. Major movers were Ney, who came from 19th to 9th, and Adams, who moved from 17th to 11th.

The first feature was stopped for a double flip on opening lap (actually the second lap of the race). Duke had slipped into third place past Johnny Scarborough coming out of turn two, and when Scarborough attempted to retake the spot in turn three, the cars tangled, with Scarborough flipping, while Duke spun. As other cars took evasive action, Jake Frye also flipped wildly, and Jay Krout also sustained damage (and an apparent injury to his left hand). Despite the flips, both Scarborough and Frye’s crews were able to repair their cars, and both ran the second feature.

From that point, while Newport’s Reigle sailed in front of the field, Ney, McVey and Newlin dueled for position behind him, while Duke put on the evening’s charge, coming from 11th to 4th over the final seven laps. Unlike the regular feature, the make-up race featured a tricky, slick track, with drivers fighting to get to the bottom for advantage. Ney in particular surprised regular fans by racing low, the opposite of his norm.

As impressive as Duke’s charge from the rear was after the early accident, he was hardly the only mover. Newlin came from 13th to 4th, and Dodson went from 22nd to 10th.

Hoosier Tire Mid-Atlantic awards a “Burnin’ Rubber” award, a new right rear tire, to the driver accumulating the most feature positions advanced, and for this night, both features counted. Ney (Reading) advanced 15 spots between the two races to claim the prize.

Heat races for the 28 cars on hand were won by Sweigart, Duke and Ganoe. Jared Zionkowski took the B-mail/consolation race.

In the third heat, front-row starter Ney went sideways in front of the field before the start/finish line, and Erin Statler was the ultimate victim, flipping into the fence during the melee. She was uninjured, but her brand new car was done for the night. Alex Potosky’s car also was damaged enough to end his evening.

Next weekend, the PASS sprinters will join their Laurel Highlands counterparts for a co-sanctioned event Friday at Clinton County Speedway, then return to Port Royal Speedway Saturday for a three-division night of sprint car racing, with 410 and URC 360 cars also in action.
Photo attached