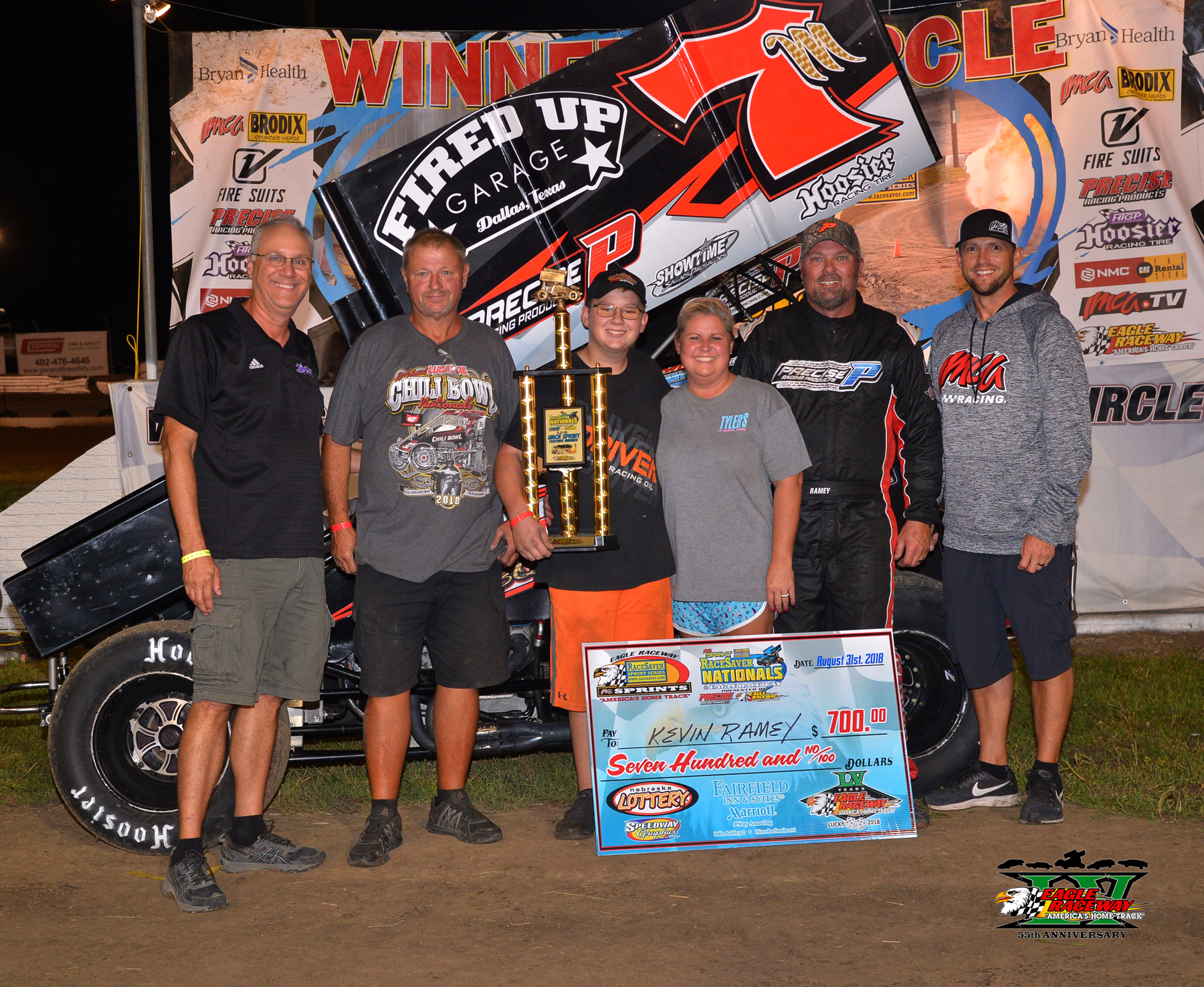 If it’s Labor Day weekend around Lincoln, Nebraska you can count on 2 things. Most importantly, it’s time for the sixth annual Racesaver Sprint Nationals. Sadly, the other thing is that it’s going to be wet!

A half-hour downpour followed by drizzle and mist would have caused lots of dirt tracks to cancel, but Eagle Raceway isn’t most tracks and the Racesaver Sprint Nationals is just any race!! The track prep crew worked overtime to bring the track into shape to host 101 sprint car teams in what has come to be known as America’s Largest Sprint Car National Event. Then as the preliminary features were being run, large drops again began to fall. Eagle’s track prep crew took advantage of the half-hour delay to rework the track again. That worked wonders with 3-wide racing and slide jobs galore highlighting the rest of the evening’s action.

During the preliminary racing there were several serious incidents. Josh Riggins got up and over the wall in turns 3 and 4, ending up with the 14J hanging on the catch fence in the second heat for the Racesaver sprints. Trey Gropp’s #54 ended up flipping after hitting the wall in turns 1 and 2 in the third heat. Heat 5 saw the #30 of Brandon Hickman ride the top rail in turns 1 and 2 in heat 5 and ended up rolling over. Mike Boston’s 51 and the 11 of Justin Melton made contact in heat 6 with Boston spinning and hitting the wall in turns 3 and 4. The D Feature saw Tige Jensen’s 12 start smoking from the right side of the engine. Jensen was determined to hang on to a transfer position but ended up with the engine consumed in fire a few laps from the finish. The C Feature saw the 22K of Kaleb Johnson start bouncing and end up flipping over the wall in turns 3 and 4 in nearly the same spot as Riggins had earlier. Gene Ackland suffered a stuck throttle in his #14G in the B Feature and ended up hitting the turn 1 wall full bore before flipping.

The first A Feature was for the ATV Motorsport IMCA Sport Compacts. Terry Tritt’s 5X, the88K of RJ Maas, Shawn Hein in the 5H and Justin Callender’s 17 led the field after lap 1. Contact between the 26X of Brad Gallagher and Callender on lap 3 sent the 17 headlong into the backstretch wall, bringing out the red flag. That put the 70SS of Steffen Oaks into fourth. Oaks moved up to third with 11 laps left. Maas grabbed the lead the next time around before losing the spot back to

Tritt after another circuit. 1 more lap saw Maas again move back to the lead. Oaks passed Tritt for second after another lap and grab the lead from Maas with 3 to go. The final top 4 were Oaks, Maas, Tritt and Hein.

Oaks’ victory came from the 10th spot on the starting grid. He related “Oh Man!! That was definitely the best race of the year! I saw RJ and Tritt going to battle and I was just waiting for something to happen. Finally, I got the low line and started to count down laps. I got around RJ and took the lead. After that I just saw the checkered flag”.

The A Main’s initial start was called back, but when there was an official lap in the books Kevin Ramey had used the same move he tried on the first attempt to put the 7M into the lead with Casey Burkham’s 45B, the 5 of Stu Snyder and Ethan Barrow’s 14S hot on his push bumper. Barrow moved to second on lap 2. Tyler Drueke pulled a 360-degree spin in turns 1 and 2 for a caution period the next time around. On lap 4, Justin Fifield’s 17X went very high in turns 1 and 2, hit the wall and ended up and over. Zach Newlin used the restart to put the 11Z into fourth. Chad Wilson’s #20 stopped in turn 4 the next lap for another caution. Jason Martin passed Newlin on lap 8, putting the 5X into fourth. Jake Bubak’s 74B hit John Carney’s 11C coming out of turn 2, sending Carney’s mount flipping. 2 laps following the restart Martin advanced to third. The final change in the top 4 came when Claud Estes cracked the top 4 in his 74E with 5 to go. From the checkered flag Ramey held off strong challenges from Burkham with the top 3 nearly nose to tail. The top 4 were Ramey, Burkham, Martin and Estes.

Ramey is currently leading the Racesaver IMCA points chase and won the Jake Ita Memorial Race of Champions at last year’s Racesaver Sprint Nationals. His victory came after starting third. “That first start was just a normal deal, with that many cars and with everybody dancing around. I had a good clean start on the first one and then had to turn around and do it again on the second one. I got around the 5 on the back straightaway and then passed the 45B. I just ran as hard as I could for the win. We had a great little hot rod tonight” he said. Ramey’s sponsors include Jambo’s Barbecue Pits, Precise Racing, Fired Up Garage and Weld.

Saturday’s action has been moved up one hour. Racing will begin at 5 PM with no hot laps being run. Following the Racesaver A Feature the Jake Ita Memorial Race of Champions will be run.