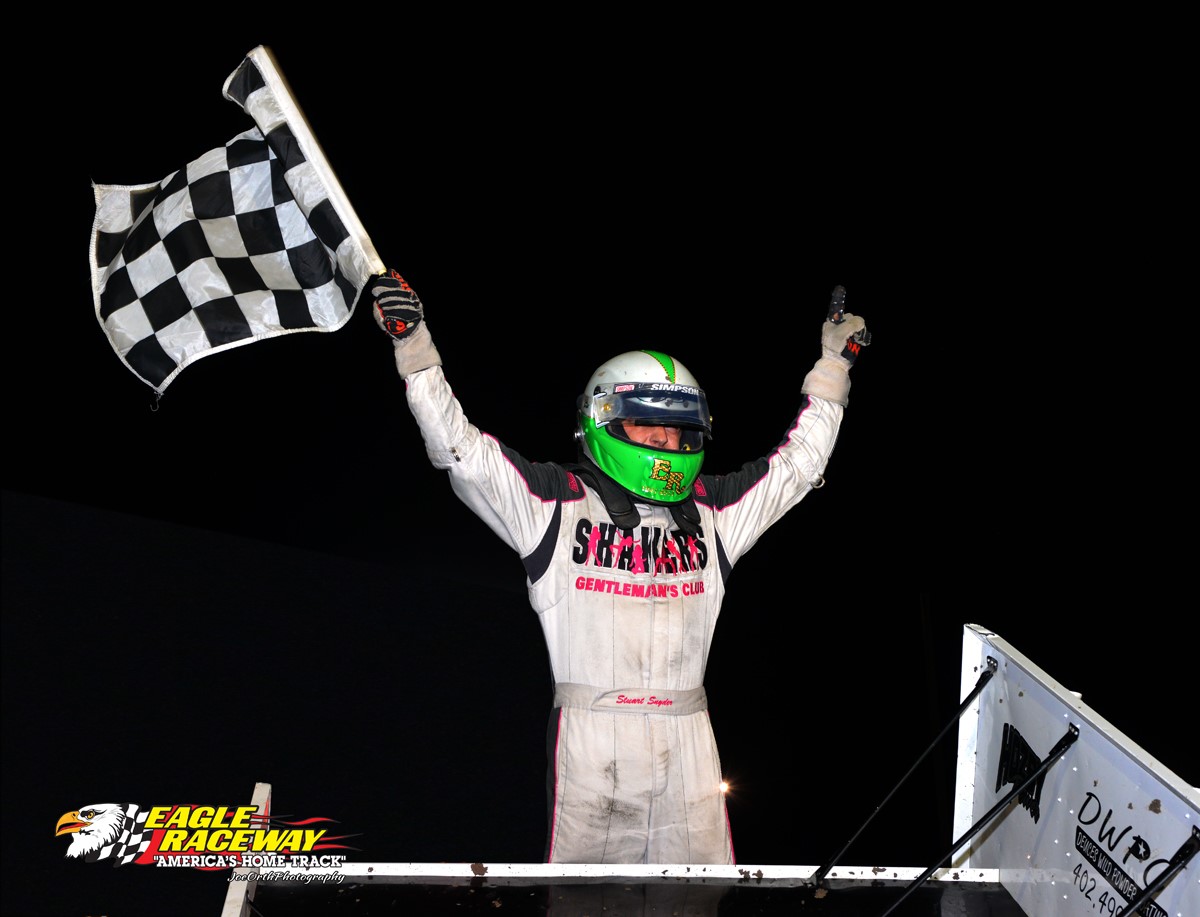 This week we get together with Stu Snyder, 30, from Waverly, Nebraska. Stu, who has rightly earned the name “Superman”, came home 10th in the A Feature on Sunday at the RaceSaver Nationals℠ this year.

Q: You’ve driven sprints for a long time, mostly in the 360’s and with some 410’s. When did you start running a Racesaver sprint?

Stu: I ran the Nationals 2 years ago, and then we decided to step it up this year and ran off and on in the Racesaver program and still ran the 360. We ended up 4th in points with the Nebraska 360’s.

Q: What do you think of the Racesaver program?

Stu: I think it’s a great deal! I mean, here in the last couple of years it’s gotten to where everybody is competitive; it’s very competitive in fact. On any given night, you don’t really know who is going to win. The motors have gotten substantially better than when they started at Eagle. Even though the rules are so tight they have gotten them to where they really are a lot faster now than what they were when I first ran them a couple of years ago.

Q: Did you get qualified for the Sunday A Feature on Friday or Saturday?

Stu: I was kind of one of a kind actually; I qualified BOTH nights. I don’t think anyone else has ever pulled that one out of their hat! We had an issue with a barrel of fuel that was dirty on Friday. I didn’t know it, nobody on my team knew anything about it. We pumped fuel from the barrel into a jug, put it into our fuel tank and went out and won our heat race. Then we locked into Sunday’s A by running ninth. But, when we went through tech we were DQ’ed. So, we stayed up all night Friday into Saturday morning; got everything cleaned out and ready to roll again for Saturday. We started at the back of our heat race on Saturday and won that. Then started ninth or tenth in the Feature and ran second to Tyler Drueke.

Q: That put you starting eleventh on Sunday then?

Stu: Yeah. The track was a little different at the beginning Sunday from what it was towards the end. I probably should have left the car where we had it on Saturday night. Roger had a great track all weekend, but he kind of threw a wrench into things when he reworked the track. Luckily the weather held off and we had a great track every single night. Roger reworked the track during driver introductions for the finale. I and my crew chief got together and thought “Man…maybe this thing is going to stay tacky”. So, we changed some stuff. The way it turned out, I wish we’d left things alone because I would have been really good at the end of the race.

Q: What do you think of the tough Racesaver rules?

Stu: I think that probably in the next 5 years that the Racesavers are going to be one of the classes that has a ton of cars. And, as long as they leave the rule book where it’s at now, I think you’re going to see the car count keep growing. Because the rule book is what it is! It’s black and white; this is what you have to do, this is what you can have. There is no grey area.

Everything gets teched every single night after the feature. And that’s on a weekly show!!! Then, when you go to Nationals everybody gripes about having to wait in line to go through tech. But, you have to keep it that way because otherwise you have people trying to find grey areas; trying to do illegal stuff. If you don’t stop stuff like that you’re going to have happen what went on in the ASCS where they came out with a great thing in the beginning with a straight out-of-the-box head but now we’re spending ten to twelve thousand dollars on a port job on a supposedly spec head. I’ve got maybe forty-six or forty-seven thousand in my 360 motor right now. I mean, don’t get me wrong; I love going a little bit faster, and I love the 360 racing. When I ran 410’s I loved that too, but when you drop that Racesaver motor in, it puts the driver back into it. Also, the set-up. Because, you’re limited as a driver on what you can do on the track. You don’t have bleeders to keep the tire pressure down; you don’t have wing sliders so that when the car gets loose you can’t pull the wing back to make the car better. They’ve done things with the rules package for the Racesavers that makes the class what it is. It’s a really good deal. It’s fun to be to be close to home, or even go anywhere in the country and as long as you’ve got a decent bullet under the hood and decent equipment, you’re in the hunt for a win instead of maybe running for third or fourth.

Q: Since you had to qualify twice, I assume that you’re in favor of the 3-day format then.

Stu: I think it’s a really good format. I don’t know what changes you could do to the format. If he gets even more cars we may have to go to a 4-day deal, but keep the same kind of layout for each night. It gives drivers like me the chance to not have to start in a Z Feature or wherever and run the alphabet to make the Sunday A Feature. The other thing that I really like that Roger changed is that he made it the first night is the first nine cars in the feature, the second night is the second nine and then Sunday’s B Feature is the last nine. The way it used to be was the first night was the inside row, Saturday was the outside row and Sunday’s B was the middle row. You could try and better yourself at that point even if you were locked in. But, you also took a chance on tearing your equipment up, having another night on your motor, or possibly taking out somebody else’s chance of getting in when you’re already locked in. The way it is now you don’t have to run Saturday at all because you’re already locked in to a better spot than what you could get by running again.

Q: Do you think that the local guys have a big advantage at the Nationals?

Stu: I do. I’ve been at a lot of tracks throughout my career across the country, but there’s nothing like running at Eagle. There’s nothing like having the background of running there every week, or every other week for years. It’s tricky! I don’t know how to say it, but it’s just different. To be able to have as many laps on the track as I do, and to have had the success that I’ve had there, it definitely puts the local guys just a little bit above all of the guys who come in from out of town for the Nationals. All of the guys from out of town tearing their stuff up at practice night on Thursday; us locals knew where that hole was in turn 1. It’s been there for 53 years, and it’s not going anywhere. We know how to get through it, or how to go above or below it. I thought our local drivers did a great job. I don’t know the stats on heat race wins, but I’m pretty sure us locals were ahead of the visitors. It’s kind of like the Knoxville Nationals. If you’re from out of state and haven’t run Eagle a lot, I would think you’d come three or four weeks early. Leave your stuff with a buddy here and come in just to run the weekly shows three or four

weeks ahead. That would be a big advantage for them and would certainly help them. Eagle is just its own little deal. I’ve run a lot of race tracks, and it’s just…..tricky!

Q: Do you enjoy getting to race against teams from all over the country?

Stu: Oh, for sure! I’ve got friends from California, and Texas and friends from South Dakota, North Dakota and Iowa. It’s cool to meet at one place. It’s not like meeting at the Knoxville Nationals, because when you come to the Racesaver Nationals, you know you’ve got just as good of a chance to win as the next guy. It’s just such a fun atmosphere. They leave the pits open pretty much all weekend, so you can come and go as you please. You get buddies from all over staying at your house. It puts the families back into racing.

Q: Is there anything you would like to say to the fans or drivers who haven’t come to the Racesaver Nationals yet?

Stu: You’re missing one hell of a show! You’re missing one of the best races of the summer. Once I raced it the first time….I mean, I’m not a full-time Racesaver racer, but that’s one show that I look forward to on my schedule. I really get excited about it. You get pumped up, your sponsors get pumped up, your crew does too. If you haven’t made it here yet, you had darned well better make it here next year!!!!!