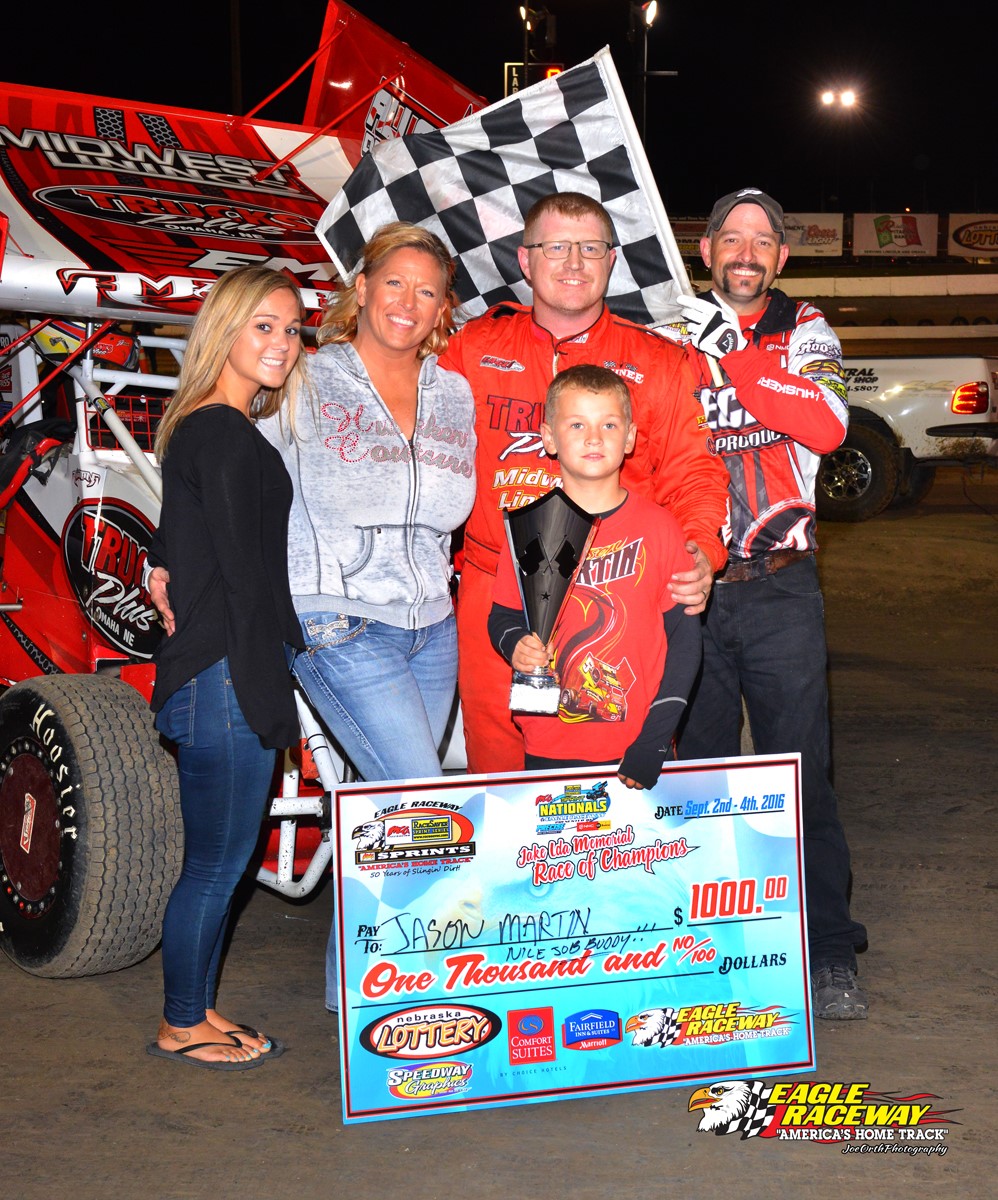 As seems to happen every year during the Racesaver IMCA Sprint Nationals, presented by Precise Racing and NMC/The Cat Rental Store, Mother Nature tried to throw a wrench into the works. An approximate 1 hour rain delay after the second NAPA IMCA Sport Modified Features could not stop the racing action at Eagle Raceway however.

Matt Etzelmiller’s #17 made contact with the 77D of Keith Dragoo in the third Racesaver IMCA Sprint Heat and went flipping in turn 4. In the H Feature for the class Charlie Ware went for a nasty tumble in turn 1. He was transported to the hospital for observation. His condition was unknown at the time of this article. The last incident in the preliminary racing came in the B Feature for the sprints when Ty Williams’ 911 flipped down the front stretch. On the restart, Gregg Bolte got sideways and went for a ride in his 00B. Other than Ware, no serious injuries were noted.

Brian Osantowski’s 999, the 76 of Lance Borgman, Gary Saathoff in the 96 and the 5T of Terry calendar led lap 1 of the NAPA IMCA Sport Modifieds A Feature. Lap 2 saw Nate Thompson put the #37 into fourth. Mary Lenz looped her #17 in turn 4 for a caution period. 1 lap after the restart Borgman and Saathoff both passed Osantowski; however, Gunnar Pike’s 25 and the 12 of Brad Dvorak got together and spun out in turn 1. Borgman again snagged the lead on the restart. Dana Deeke moved his 36 into fourth the next lap, but lost the spot to Thompson after 2 more circuits. Dvorak again looped his racer in turn 4 with 6 to go. From there to the finish the top 4 remained unchanged with Borgman first, Osantowski second, Saathoff third and Thompson fourth.

This win kept Borgman’s streak of a victory each time that he visited Eagle in 2016. “Another season at Eagle Raceway is over for me. After we battled the rain, Roger got the track back into shape and made it nice and racy” Borgman stated. Borgman’s sponsors include Coordsen Farms, Penner Insurance, Jet Racing and Hergott Farms.

The Racesaver IMCA Sprint A saw Tyler Drueke lead lap #1 in the 12, followed by Brandon Horton’s 1BH, the 7KX of Toby Chapman and Mike Boston in the 51. Boston passed Chapman on lap 3 and Stu Snyder’s 23BC also got around Chapman for fourth the next time around. Boston advanced another position after another lap, with Snyder following him into third the next time around. But, Zachary Newlin spun the 11Z in turn 4. Chapman again moved to fourth on the restart, then took third the next lap. Lap 11 saw Snyder pass Chapman yet again for fourth. Jimmy Grasso’s 8G spun in turns 1 and 2 the next time around. After the yellow lights went out Snyder moved to second with Chapman taking over third after another lap. The last change in the top 4 came with 6 to go when Jake Bubak put the 9X into fourth, making the final top 4 Drueke, Snyder, Chapman and Bubak.

“I’m going home to bed! I was up until 3:30 taking apart a junked race car last night, then up at 7:30 to go to Speedway for parts to fix the junked race car. The win tonight was a real 180. I get to start 10th tomorrow night, but with it being 35 laps, you could start anywhere and win. Our performance in the Race of Champions was really encouraging. I started 12th and got up to 6th. I moved around a lot, trying some things but I was still going the same speed as last year’s winner of the finale. There is so little difference in the talent of the drivers here and the ones who come for the Nationals. I will just race the track, hope for some yellows and see what we can do. Thanks to Matt, Dad, Dustin, Ben and Zach for all of their extra work this week ” said Drueke. Drueke’s sponsors include Drueke Trucking and Ranch, Zoz Farms, Jeffrey’s Trucking, Reid’s Farmacy and Agri-Builders.

The Midwest Lightning Sprints were up next. Tadd Holliman’s 9S hit the front stretch wall very hard on the start, resulting in injuries to his hand. The first official lap saw Scotty Bradley’s 1X, the 8 of Brandon Johnson, Presley Truedson in the 2 and the 49 of Ryan Secrest out front. Lap 4 saw Jim Kennedy pass Secrest, putting the 14 into fourth. Bradley slowed dramatically on lap 9, moving Devin Feger’s 40 into fourth, and moving the other three up one spot. With 2 laps left Truedson spun in turn 2, giving the fourth spot to Kobe Alison. On the restart Kennedy went to the infield and the 42 of Ty Tilton moved into fourth. The last lap saw Tilton move up to third. The final top 4 were Johnson, Feger, Tilton and Alison.

This was the first time for Johnson to visit Eagle Raceway, in his 10th year of racing with the series. “This is a beautiful establishment! I want to thank Alan and Valerie Truscinski, Jim and the entire Truscinski family” related Johnson.

The finale for the evening was the Jake Ita Memorial Race of Champions. Jason Martin in the 5X led lap 1 with Ty Williams in the 911, Blake Robertson’s 15X and the 91BC of Adam Gullion close behind. Lap 2 saw Jack Dover put the 84 into fourth. The next lap Robertson moved up to second with Dover following suit and taking over third after another circuit. Lap 7 saw Zach Blurton’s 2J move to fourth. With 3 laps remaining Blurton lost fourth to the 74B of John Carney II. Dover advanced to second on the last lap. The top 4 were Martin, Dover, Robertson and Carney.

“We’ve been making a lot of improvements this year. These are the best drivers in the class here, but my crew and I can hang with the best. I start fifth in the A tomorrow night, but it’s 35 laps. That’s a long race. If the track gets the way it is now, and gets slick, I can be right there on top at the end” said Martin.

Sunday’s racing action sees the pit gates open at 3 P.M. to allow the teams to prepare for the driver autograph session and car show from 4:30 to 5:30 in the courtyard. Pit passes will be $25.

The preliminary action will set up the final 9 drivers for the big show.