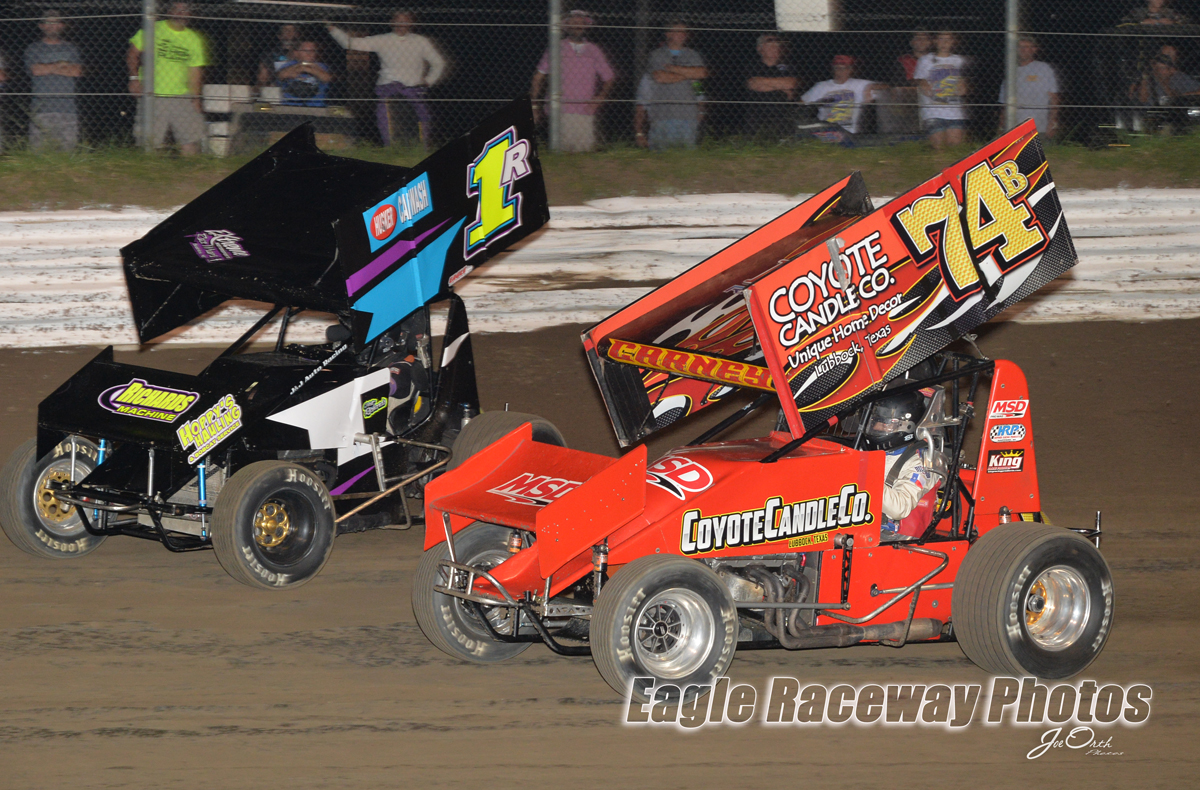 So; it’s Thursday again, and with just 5 weeks left until the 2016 Racesaver IMCA Sprint Nationals, it’s time for another driver to be introduced to you.
Last week you got to know a little about 18 year-old Ethan Fleetwood from Smithville, Indiana; who is in just his second year of competing in the Racesaver series. Now, this week we speak with John Carney II from ElPaso, Texas. John has been racing for 16 of his 33 years; not just in the Racesaver class, but also in 360’s an…d 410’s; and he wins!. He managed to win almost everything last year at the Nationals in fact, and ended up being crowned the 2016 Racesaver Sprint Nationals Champion.
Q: What’s your opinion of the Racesaver class in general?
John: It’s great. It gives the Saturday night racer a chance to get in and drive a sprint car. The 360’s and 410’s are really getting pretty expensive. For what the payback is for a Racesaver 305 and what it costs to race one weekly, you can kind of find your way along.
Q: How about the tech that you have in the Racesaver class?
John: The tech is the most important part of the class. Everywhere you go it has to be the same, and that’s every track and every race. That’s what makes the Racesaver class what it is; the tech.
Q: What do you think about the Racesaver Sprint Nationals?
John: It’s awesome! Any time you can get together with nearly 100 competitors and race for 3 days; on a great track all 3 days, it’s a lot of fun. To come out on top of a deal like that is really neat.
Q: Do you enjoy the 3-day format?
John: You get a lot of track time, that’s for sure. That’s probably the best part about it; all of the track time. You go to a lot of other races and it’s a lock-in format, with just 1 day of qualifying. You get heats and stuff at those, but with the Nationals, you get heats, preliminary features and A Features for 3 days. The format is tough because you have to draw, then you have to run at the front of your heat to get to the A. But, the heat races are long enough that if you have a good enough car you can get to the front no matter where you start. You get a lot of track time, and that’s the best part of racing; being on the track.
Q: Did you enjoy racing with drivers from all over the country?
John: Oh yeah. This kind of race will bring drivers from all over. It is the biggest Racesaver event, so you have to expect to have that much competition. I would bet we’ll get over 100 easy this year.
Q: What do you think about the 3-wide start for the Big Show on Sunday?
John: That’s pretty crazy that they do that, but as far as I know, it’s been successful every time. The track is wide enough, and the track prep is always on point, so it works. I think that everyone’s mentality going into a 3-wide start is you have to give yourself a few laps, let the cars get spread out before you make your move.